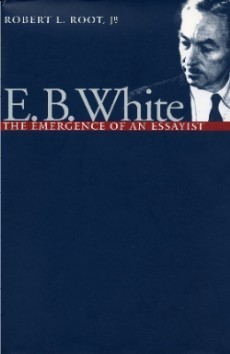 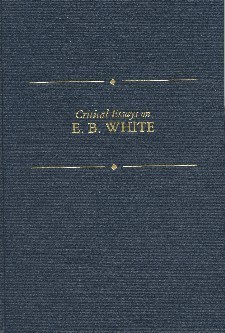 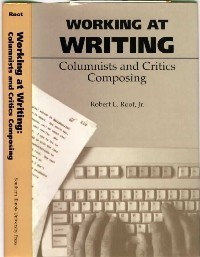 “Sometime during high school or college every student swims through E. B. White's 'Once More to the Lake.' In this book Robert Root explores not simply the smooth surface of White's prose, but he wanders the shoreline, showing how White became an essayist, tracing White's wanderings as a paragrapher and columnist for the New Yorker. E. B. White: The Emergence of an Essayist is a book about writing, a study rich with delight and instruction.”

In E. B. White: The Emergence of an Essayist, Robert Root traces the literary career of the best-known and most widely admired American essayist of the twentieth century.

Root explores the milieu in which White began writing the "Notes and Comments" section of The New Yorker and puts into perspective the influence of popular "colyumists" like Don Marquis and Christopher Morley on the tone and form of White's work as a "paragrapher." He examines White's persistent disaffection with the demands and limitations inherent in his "Comment" pieces for The New Yorker and his experiences as a columnist for Harper's Magazine, where his "One Man's Meat" feature produced his most enduring essay, "Once More to the Lake," and took the segmented column form to new levels of accomplishment. Drawing on White's manuscripts, Root's literary analysis of early drafts demonstrates how unique White's essays were.

E. B. White greatly expanded the limits of literary nonfiction and in the process introduced elements and methods that helped produce the contemporary segmented or disjunctive essay. From Root's research we receive new insights into the process by which White created his essays and how he was influenced--and often constrained--by particular literary forms and by the limitations of the circumstances in which he wrote them. White was famous for his habit of "writing by ear," and he believed in "writing a thing first and thinking about it afterward," work habits that led to some of the most memorable American literary essays of the twentieth century.

E. B. White: The Emergence of an Essayist is the most detailed study to date of White as an essayist and a significant contribution to the literature examining writers at work. Kathleen Wildman, in the Antioch Review, called it “a fascinating journey into the mind of the master” and “thought provoking about the emergence of the twentieth-century essay.”

CRITICAL ESSAYS ON E. B. WHITE
Edited by Robert Root

A collection of articles, essays, and reviews on E. B. White’s writing, critical assessments of his career, and a biographical introduction.

An overview of the writing habits of nonfiction writers, a series of interviews, and an anthology of the work discussed in the interviews by political columnists Tom Wicker and Richard Reeves, essayists Jim Fitzgerald and Kathleen Stocking, film critics David Denby and Neil Gabler, and theater critic Walter Kerr.