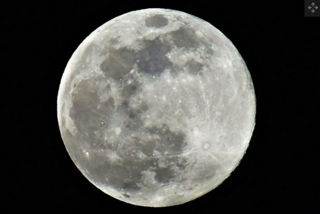 I didn't see the moon on April 8—the "Pink Supermoon" being hyped online in anticipation for days—because the skies were cloudy in Wisconsin, but the next night, I saw a very large, very bright moon, not pink but still as close to the earth as it would get all year and as dazzlingly illuminated as I had ever seen it. I wondered if the brilliance was enhanced by the recent clearing of the atmosphere because factory and traffic pollution had lessened everywhere as the country practiced self-isolation. The travel and business shut-down due to the Coronavirus quarantine was, generally speaking, good for the air, a plus for the environment. It had been a very long time since I'd seen the moon so bright in a sky so clear,

As it happened, I'd been reading Kathleen Jamie's essay collection, Sightlines, before I noticed the brightness beyond our window blinds. I immediately turned back several pages, to one I'd dogeared in her essay "Moon." She had the chance to watch a lunar eclipse mostly on her own at home, the children preoccupied downstairs, and her account of the eclipse is carefully and exactingly observed. I was struck by her reflections on the event. "The moon does us great service," she tells us, "metaphorically and literally, and this is part of it—occasionally she allows us to appreciate the shadow cast by our own planet. She shows us that the earth, for all the cacophony of life on its surface, is firstly an object, bigger than we are, magisterial enough to cast a shadow thousands and thousands of miles into space." Her essay made me remember being stunned by Annie Dillard's essay "Total Eclipse," in Teaching a Stone to Talk, where she takes us through a solar eclipse and ponders its impact upon her.

Despite the catchy title of Supermoon, the moon this April offered nothing of the drama of the earth's shadow darkening its surface or the moon's body blocking our view of the sun, but it held my attention for many minutes. I could see it at an angle through the space between the bedroom window and the blind, nearly filling that narrow gap, making me put my book away and reach for a pair of opera glasses I use to watch birds on our feeder some mornings. I could easily see the dark land-formation shapes against a gleaming yellow surface and eventually hurried downstairs to fetch stronger binoculars. Soon enough I urged my wife to come to my side of the bed and look out at the moon, handing her the opera glasses and binoculars in turn. I turned off my reading lamp to make our bedroom darker, to make the moon even brighter,

Unexpectedly, memories of moon-gazing flashed into my mind. I'd been in college when the first unmanned lunar landings occurred, living alone in an apartment in an old house in a neighboring town. I sat up past three o'clock in the morning to watch the first live telecast from the moon from a camera on the lunar lander. When the images began to appear, slowly, one strip at a time, I turned off the lights and pushed my face close to the screen, as if I could get even closer to the moon. On earth the physical moon could at that moment be seen through my apartment window high in a clear, cloudless sky. I kept looking out the window at that small bright circle in the darkness and then looking back at the image on the television screen, trying to reconcile the two, trying to appreciate how I could be seeing both the familiar remote and distant satellite and the close-up of its actual surface at the same moment. I remember feeling that our relationship with the solar system—with the universe itself—had changed.

Now, back in bed, leaning to keep the moon in view, I hoped to memorize what I was seeing so that I might be able to call it up when I closed my eyes some cloudy nights, to reassure myself it was out there. In our daily lives, our attention to getting and spending keeps our line of vision low and lets so many aspects of the natural world be overlooked, ignored, forgotten about. I was happy to lie there quietly, envisioning the moon as vividly when I closed my eyes as when I had viewed it through my window. I tried for a moment to put pandemics and politics into perspective, but soon dismissed thinking about them at all. Even with my eyes closed, the moon was too bright, too close, too permanent for me to be distracted by anything else.

Note: This image of the April 7, 2020 Supermoon by Bill Funcheon appeared on www.space.com the next day. He photographed it above New Jersey.