In the Labyrinth Garden 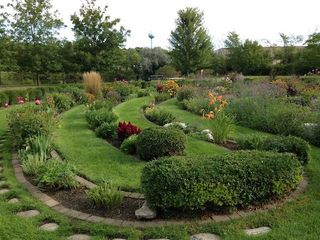 I should have realized that the Labyrinth Garden Earth Sculpture in West Bend's Regner Park wouldn't be a typical labyrinth. The words "Garden" and "Earth Sculpture" were the giveaways. The other labyrinths I'd walked in Wisconsin had been gravel paths between borders of stones and small boulders or they'd been paving stones between brick barriers, all leading to a bench in a center circle. Most replicated the medieval pattern from Chartres Cathedral, eleven circuits divided into four quadrants, rife with twists and turns; some followed the less complicated Cretan pattern of seven concentric circuits. But in the Cretan design of the Labyrinth Garden, a grassy path wound through barrier walls of well-tended flowerbeds. Beyond the outermost wall of flowers was a circling lawn ringed with inscribed commemorative "Celebration Stones." A low wrought iron fence enclosed it all and a huge metal dragonfly hovered above part of the path. It was as much garden as labyrinth.

Labyrinths are meant to inspire walking meditations, where you try not to think of the world beyond the labyrinth. Meditation guides advise you, "When you walk, just walk." You try to concentrate on your breathing or to focus on an emotion, like compassion or empathy or forgiveness. When you reach the center circle you hope to sit calmly, silently, and meditate a little longer or simply breathe, before winding slowly back to where you started.

But when I first walked the Labyrinth Garden, I found it hard to meditate. Rows of fragrant, colorful flowers, ornamental grasses, and herbs bordered the path on either side. Sometimes the breeze made the tallest flowers rock towards me and then sway away. Flitters of movement continually caught my eye: a goldfinch visiting one thistle after another, an upside down bee clinging to a pulsing flower, abundant butterflies drifting down or fluttering up. Once, rather than disturb an orange butterfly on an orange blossom, I waited for her to fly off before I moved past her flower.

I stopped often to bend and read identifying metal tags on low posts in the mulch. Some names were familiar, like Larkspur and Lupine and Prairie Smoke; some were whimsical, like Gryffindor Colors, Intelligent Design, and Panties in a Bunch. When I moved on, I would remember the names but not the images of the flowers. Further down the path I would stoop and read a name I'd read only minutes before, then mutter to myself, "Ah, Forget-Me-Not," as if I recalled it from before.

It took me a while to make my way to the center of the Labyrinth Garden, sit for a few minutes contemplating only morning air, then retrace the circuit at the same attentive pace as before. I circled the labyrinth, slowly reading inscriptions on the Celebration Stones. I paused once to watch a butterfly settle on one that read, "In Loving Memory." It was not my usual walking meditation. Still, after an hour in the Labyrinth Garden, in sunshine and warm breeze, gazing at flowers and grasses, at birds and bees and butterflies, I felt a meditative calm. I felt content. I felt at peace.