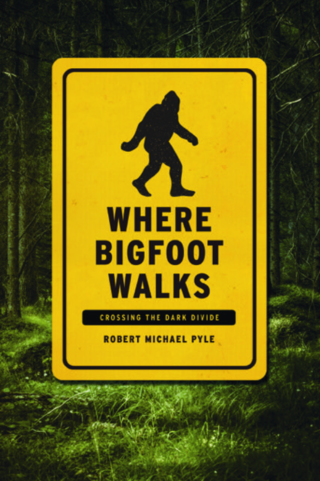 I just completed a rare combination, at least for me, of reading and viewing. I read Where Bigfoot Walks: Crossing the Dark Divide by Robert Michael Pyle, an updated 2017 edition of his original 1995 book. Then I viewed The Dark Divide, a film based on Pyle's book starring David Cross as Pyle and Debra Messing as Pyle's wife Thea. A short promotional video included scenes from the trailer, interviews with Pyle, Cross, and director Thomas Putnam and occasional mention of Bigfoot. The book is a series of chapters about Pyle's travels in Bigfoot terrain, his research, and his conversations with people who wrote, both pro and con, about Bigfoot's existence. Pyle isn't totally convinced but, especially in additional material for the new edition, tends to lean that way. A respected lepidopterist, he also writes authoritatively about butterflies, moths, wildlife, and terrain. His scientific observations often deflect his attention from narrative. The book is less a nature memoir than a blend of informative reflection interspersed with trail observations.

Pyle as a writer was not unknown to me. Years ago, living near Denver, I discovered The Thunder Tree: Lessons from an Urban Wildland, his 1993 nature memoir about the High Line Canal in Colorado, near where he grew up. Because I'd grown up near the Erie Canal in western New York, I was curious about parallels we perhaps shared in our youth and also eager to learn about unfamiliar western terrain. Recently, a joint online presentation of Pyle with Scott Russell Sanders led me first to his Nature Matrix: New and Selected Essays and then, somehow, to both the Bigfoot book and the movie.

Curiosity about the film made me read the book first. It's not often that a nature book gets dramatized into a story film. The Dark Divide is not a documentary; it doesn't play like an episode of Nova or Nature or other PBS programs. A trailer I'd seen convinced me it was filmed in the Pacific Northwest and offered a thorough sense of the terrain Pyle traveled through to research his book. The movie's title was taken from the subtitle of the book; viewers shouldn't expect close encounters of the Sasquatch kind. Spoiler alert: A single muddy footprint is the only sign of Bigfoot in the film. Pyle is sometimes alarmed by vague sounds, but no hairy giants emerge from the forest.

Though ostensibly set in 1995, the film was created decades later. In that 27-year-long-gap between them, the personal changes in the lives of the main characters altered the interpretation of Pyle's experiences in the Gifford Pinchot National Forest. In the book Thea Pyle has a minor but useful role as a backup figure in her husband's travel plans, but she died in 2013, twenty years after it was published; in the film, she is introduced as suffering from cancer and Pyle is presented as hesitant to leave her to head into the wilderness to hunt for lepidoptera. Only after her death does he set out, haunted by her earlier urging. The film presents Pyle as someone psychologically unprepared for wilderness wandering; Cross plays him as often confused or clumsy or uncertain, while the Pyle who narrates the book is assured and reliable and confident as both scientist and outdoorsman.

The film is dedicated to Thea and the credits mention drawing material from Pyle's other books. These alterations in the life facts surrounding the book affect our understanding of the film as an adaption of it. The film is largely the story of one man's expedition into unfamiliar terrain in the wake of tremendous loss, responding belatedly to the encouragement his dying wife gave him while they were still together. His experiences are alternately comical, arduous, harrowing, and healing. He comes through them as a man altered in his sense of himself. The Dark Divide is an actual portion of the landscape in the Cascade Mountains of Washington State, but metaphorically it suggests the descent into grief and ascent into recovery. The visual elements of the film reinforce that distinction sequentially—at one point, Pyle clambers through a long underground passage, finds pictographs on cave walls, and weeps in the darkness before emerging. He is a stronger individual by the end of his trek.

I'm quite fond of both Where Bigfoot Walks and The Dark Divide, but I'm not inclined to recommend reading and viewing them sequentially or even close together. They don't reinforce one another as perhaps a production of a Shakespearean play might validate a previous reading of it. Instead, together they make us aware of the demands each genre makes on the way it presents its material. That's not a criticism; it's an explanation.