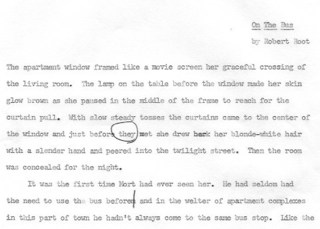 I came into the idea of writing about my early fiction with the expectation that it would be interesting—and possibly amusing—to figure out why I once wrote fiction and—perhaps riskier—to learn what kind of a fiction writer I was. My second effort at confronting an old short story—I might have said "examining" but in this case "confronting" seems more appropriate—tackled "On the Bus." The story centers on the self-absorption and isolation of Mort, a single man working in a department store by day and taking college classes in the evening. Already I've analyzed the story more in this paragraph than I likely did whenever I wrote it.

As an undergraduate I'd taken a course from Professor Leo Rockas in which we alternately studied, in translation, the short stories of Anton Chekhov and the essays of Friedrich Nietzsche. Over the semester, we were assigned three projects for each writer: a critical assessment, like the kind of lit/crit paper written in other English classes; an imitation or homage, something inspired by each writer's example; and a parody or satire of each writer's style. It was a good class. I didn't much like Nietzsche (Also Sprach Zarathustra; Nietzsche contra Wagner) or agree with his outlook, but my attack on him ("Root contra Nietzsche") was judged by my prof to be the most Nietzschean paper that semester. It alarmed me a little to think I might have been recruited by the German philosopher.

Chekhov's influence on me was deeper and more positive. My stories became more grounded, more restrained, more narrowly focused. "The End of Wisdom" probably shows that influence, though the conclusion might be more moralistic than Chekhov would have written. I may have intended "On the Bus" to follow that model. It's essentially a third-person portrayal of a lonely, inhibited, self-conscious college student who fantasizes futilely about a woman he observes in an apartment window and on a bus, is later attracted to a classmate he also restrains himself from connecting with, and in the end considers the possible consequences of his self-imposed remoteness. Realizing that the first woman is in a problematic relationship he imagines he might have rescued her from propels him to connect with the second woman.

It's a long story. Certain narrative elements help identify the author. At one point Mort's workplace is mentioned: "On his job he was the only young man in the store, except for two who worked on delivery. The men's clothing department was run by two older men, one near retirement who begrudged Mort's presence all together, and a middle-aged man who was civil but distant. Most of the women in the store were middle-aged except for a clique of girls his age who worked in the notions department and whose witty interchanges frightened him from attempting any closer contact than a nod of hello." During one summer, I had sold men's clothing for my hometown department store, a more positive experience than Mort's but very similar.

The sense of isolation the character exhibits was familiar to me, and the short story draws partly on that persistent and long-lived feeling. I'm sure the story was written while I was a master's candidate in the University of Iowa writing program; there are markings on the manuscript, probably by my graduate advisor (he underlined the "begrudged" remark, for example), but no critical comments. I remember him muttering disapprovingly about my writing, "Chekhovian, eh?" (For other, more complicated reasons, by the end of my first semester I stopped pursuing an MFA and earned an MA and then a PhD instead.)

The typescript of "On the Bus" was an early draft never revised any further. Reading it now, I'm aware of how much sentence level editing it needs, a question of prose style, but also how contrived that optimistic reversal at the end seems, hinting at a positive future for the main character. By the time I wrote it I was a college graduate, a former high school English teacher, a graduate student, and a husband, in many ways a different person than my main character. I'd like to think I was more accomplished, more mature, more settled than he, but I also recognize how familiar his insecurity, uncertainty, and isolation were to me. At least one family member objected to the focus on lovelorn bachelorhood, which made me wonder how to write a story that didn't draw in any way, no matter how remote, on my own individual psychology and background experiences.

None of my MFA classmates seemed to be writing Chekhovian short stories or tales with happy endings. I didn't know how I would become a different kind of writer. I stopped writing short stories once I left the MFA program.