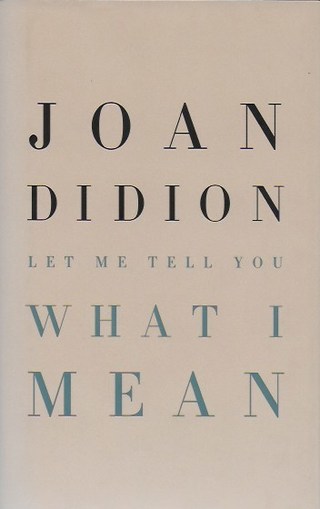 Joan Didion's essay "Last Words," originally published in 1998, opens with the first paragraph of Ernest Hemingway's novel A Farewell to Arms, published in 1929. Didion claims to have reread it when she learned that Hemingway's final novel would be published the following year, though he had died in 1961 and the last novel published in his lifetime had been The Old Man and the Sea in 1952. He had drafted portions of other work—The Old Man and the Sea was essentially the fourth part of an unfinished four-part novel. After his death, across forty-five years, his family and his publisher released three novels and two memoirs culled from manuscripts he'd given up on, as well as collections of his short fiction, reporting, and correspondence. He had hoped—had requested—that all that material would be destroyed after his death.

"Last Words," which appeared in The New Yorker twenty-three years ago, is the second-to-last essay in Didion's most recent collection, Let Me Tell You What I Mean, made up of twelve essays published between 1968 and 2000 in The Saturday Evening Post, The New York Times, and, most recently, The New Yorker. Only one of the essays, "Why I Write," was familiar to me, and because I've read all her novels, memoirs, essay collections, and her play published since Slouching Towards Bethlehem in 1968, I was happy to get this broad ranging gathering of unfamiliar pieces.

The last of Hemingway's novels, True at First Light, is taken from his incomplete African novel, started before 1954 and abandoned in 1956 after 810 pages. Didion follows his mention of it in his Selected Letters, a posthumous collection, and notes when "a certain silence [falls] on the matter." She writes, "Eight hundred and ten pages or no, there comes a point at which every writer knows when a book is not working, and every writer also knows when the reserves of will and energy and memory and concentration required to make the thing work simply may not be available." Hemingway had abandoned an earlier four-part manuscript before starting the African novel, eventually published one part as The Old Man and the Sea, and another part was published after his death as Islands in the Stream. The African novel was edited and shortened by half by one of Hemingway's sons and published as True at Half Light.

Hemingway's widow, Mary Welsh Hemingway, who decided to ignore her husband's wishes and publish work of his that he did not believe was publishable, claimed, "Except for punctuation and the obviously overlooked 'ands' and 'buts' we would present his prose and poetry to readers as he wrote it, letting the gaps lie where they were." Didion reacts strongly to that editorial decision.

The essay begins with that opening paragraph from A Farewell to Arms and Didion confesses that, as a girl of twelve or thirteen, she imagined being able to "one day arrange 126 such words myself." She reports on what she sees: "Only one of the words has three syllables. Twenty-two have two. The other 103 have one. Twenty-four of the words are 'the,' fifteen are 'and.' There are four commas." Didion's five sentences have thirty-one words. Her next sentence, detailing "the liturgical cadence of the paragraph," is itself 115 words long. It is a sharply observed reading of Hemingway's paragraph and in its own style an homage to the elements of his writing that make it so vital, especially when the words are those he felt he really needed to publish.

It's taken me a few drafts to get my overview of Didion's essay and my comments reacting to it in shape to be posted here. I appreciate being reminded that the process takes time, repeated reading, and a variety of revisions. Most of my posts here have gone through that process; those that didn't get posted were those "not yet made," "not yet written." I have to remember that the writing will tell me when and if it's ready to go out into the world. It won't always be ready and I should let it go unpublished if it isn't.

True and wise words. Not everything is ready, or even meant, for public consumption. Thanks for this! I am off to read Didion's "Why I Write."