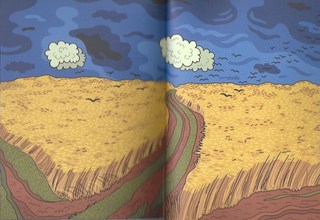 Some years ago, while I was researching the Rhine River, Sue and I toured the Van Gogh Museum in Amsterdam. My familiarity with his paintings was enhanced by that visit and by a museum guide I purchased and read on the plane trip home from the Netherlands. The guide was still on a bookshelf in our study, somehow not yet stored in a box in our garage. But it wasn't my only Van Gogh book. I also owned a copy of Vincent, a graphic biography written and illustrated by the Dutch author Barbara Stok (Laura Watkinson translated it), a volume in the Art Masters Series, which also includes translated graphic biographies of Magritte, Munch, Gauguin, Picasso, and Dali.

I'd read Vincent years before but the recent "Beyond Van Gogh" exhibit in Milwaukee prompted me to read it through a few more times. Barbara Stok often draws on materials preserved in the Van Gogh Museum, especially letters from Vincent to his supportive brother, Theo. She provides a balanced portrait of the artist, including his conflicts with other people, his self-absorption and isolation, his tendency to alienate others, as well as his dedication to his artistry. Her illustrations have a cartoon-like quality when dealing with characters, and moments of Van Gogh's anxiety, anger, and anguish are presented with distorted images.

Except for those quotes from Vincent's writing, dialogue is the only available text in the book—there are no separate narrative passages. The artist's unbalanced interactions with his circumstances are often presented without dialogue. In the absence of dialogue, the reader must rely on images, often having to make sense of what Van Gogh is feeling or reacting to by studying the context of where he appears or of what he looks at or of what he refuses to acknowledge. In one sequence, we see him noticing a starry night, then walking with his easel and equipment into the countryside to set up a daylong session painting distant wheatfields. The act of painting takes up five wordless panels, until an appreciative bystander approaches and they converse amicably. In another sequence, where he and Gauguin have set up easels in the countryside, the silent six-panel sequence of Van Gogh painting a sower at work adds images of a young Vincent and Theo enjoying the landscape; it's a way to suggest what Vincent is imagining or remembering as he paints, the personal immersion he entertains in his art.

Stok's graphic biography manages to visually narrate the course of Vincent's artistic development and engagement and to intimate his isolation and remoteness from others even as he devotes himself to his work and relies on his brother. One sequence shows him having sex with a prostitute and chatting with her afterward, revealing how tangential and unrealistic his relations with others usually are. Repeatedly he returns to his artwork and Stok often replicates some of his best-known paintings: "The Yellow House," "The Bedroom," "The Almond Blossom," "Wheatfields under thunderclouds." She includes the dark moments—the severing of his ear, the residence in an asylum—but omits his death by suicide.

Instead, the book ends with a calm conversation between Vincent and Theo about taking a more positive view of existence followed by several dialogue-free facing pages. For the first two, each with four panels, Vincent walks off to prepare to paint. Then the reader is presented with a single image across two pages, Vincent on a dirt road that extends through a wheatfield, painting blue sky, crows on the ground behind him. In the subsequent two-page image he is still painting but our perspective is further away from him, he's deeper in the field, and some crows are taking flight. In the final two-page panorama, Stok reproduces his painting "Wheatfield with crows," the birds in flight, Vincent no longer visible.

The Van Gogh Museum Guide informs readers that Vincent felt himself a failure and died after shooting himself in the chest. His brother Theo died six months later. The guide contains a small photo of their tombstones which Stok reproduces in a drawing on the last page of her graphic biography. Her ending is more peaceful and positive than Van Gogh's biography reports. When I first read Vincent years ago, I didn't expect it to be as authoritative as a scholarly study, but I probably didn't appreciate how both evocative and informative it is. My "immersive experience" with Van Gogh prompted me to read the book again differently, to pay closer attention to all those text-free panels and illustrated sequences—to comprehend by what I was seeing, by what was portrayed on the page. Like the immersive exhibit, it gave me an alternative entry into Van Gogh's art. It also raised my level of appreciation for how astute and powerful graphic narrative can be.