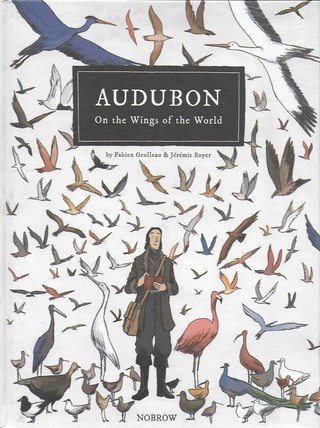 I once saw, somewhere, a display of Audubon's original double-elephant folio format (29½ by 39½ inches) colorplates depicting life-sized and lively birds. He later published a smaller seven-volume octavo edition. My copy of the Audubon Society Baby Elephant Folio edition of Audubon's Birds of America, edited by Roger Torrey Peterson and Virginia Marie Peterson, contains all 500 plates reorganized to meet contemporary classifications and measures 4 by 4½ inches. The Spring 2021 issue of Audubon, the Audubon Society magazine featured an article by J. Drew Lanham (his book The Home Place: Memoirs of a Colored Man's Love Affair with Nature was then on my nightstand) titled "What Do We Do About John James Audubon?" The article prompted me to re-read a graphic biography of Audubon I also own.

Audubon: On the Wings of the World by Fabien Grolleau, illustrated by Jérémie Royer, follows Audubon's early nineteenth-century travels in search of North American birds. It opens on the Mississippi River in 1820 as Audubon and rafting companions seek shelter from a storm in a cave where he draws an owl. This prologue establishes Audubon's tendency to ignore people around him and concentrate on his sense of artistic mission. His obsession with art is his most elemental characteristic. He continually wanders alone, shooting birds and posing them for his drawings. Pages of panels go by without words, any text only quoting his original writings or appearing as dialogue when he interacts with others, such as his patient wife or infrequent traveling companions. One narrative thread emphasizes his relationship with Alexander Wilson, his prominent predecessor at bird illustration, which later is portrayed as imagined encounters in Audubon's delirium and ending with Audubon's dying fantasy of morphing into an eagle, destroying a vulture-like Wilson, and reigning supreme over a world of birds. The book simultaneously celebrates and complicates Audubon's career.

In his foreword Grolleau acknowledges his "retelling" as "a more 'romanticised' version of Audubon's life." He admits that "views expressed in Audubon's writing and in the speech of the characters" reflect "the oppressive attitudes and terminology of the time towards African American and indigenous peoples," but credits him as "an unparalleled ornithological painter" and "one of the fathers of modern American ecology." Endnotes revealing that "numerous episodes . . . were inspired by Audubon's writings" cite specific chapters in his Ornithological Biography and admit to having "invoked a little artistic license" (as when Audubon meets Darwin). Alluding to the section where Audubon meets a runaway slave and gets him to return with his family to his owner, Grolleau acknowledges, "This book does not show that Audubon kept slaves" and his having "chosen to evoke [the subject] only in this episode inspired by his writings." Given his attention to Audubon's art and its enduring influence, was that an appropriate choice?

J. Drew Lanham doesn't think so. He claims that, though "relatively few men of his time" spoke against slavery, Audubon "enslaved at least nine people," identified as "servants" or "hands," and was seemingly "unconcerned about" their status. Audubon himself, Lanham suggests, was possibly of mixed race, since his mother might have been (or perhaps wasn't) Creole. Lanham expresses admiration for Audubon's art and acknowledges his enduring influence on ornithology, yet his sense of the artist's racism continually undercuts that appreciation. Identifying himself as a Black birdwatcher and declaring "I don't just love birds, I'm in love with birds," he's continually conscious of his separate status among birders, who are overwhelmingly white.  He identifies most nature writers as "a pantheon that speaks to the white patriarchy that drives nature study in the western world."

As a retired pre-boomer heterosexual Caucasian male educator of multi-generational European-American descent, I can easily, in 2021, be accused of racist, sexist, political, and/or philosophical bias no matter what position I take, so I won't take much of one here. Based on the evidence Lanham offers I don't find his argument fully convincing but appreciate his explanation of his mixed reactions. I don't identify myself as a White birder (to the extent I'm a birder) and am seldom self-conscious about my race. Perhaps, if Lanham hadn't examined Audubon's biography the way he has, the race issue would not have intruded between them. We would never be aware of it if we concentrated on the art—the accomplishments— of the person under investigation and didn't explore the artist's potential for flaws of character. I read Lanham's The Home Place without much attention to issues of race until the final chapters, more attuned to his personality and humanity, the elements of family and personal growth that gave me more insight into the human condition. What disturbs Lanham about Audubon is not to be found in Birds of America, a book that Lanham still keeps on his shelves. I'll keep my copy as well.

Much of what you say about Audibon can apparently be said of John Muir as well. Thanks for the thoughtful comments, Bob.