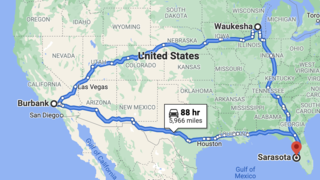 Something came into my head about distance, circled around vaguely, and then evaporated, leaving a barely perceivable image or nearly inaudible echo to remind me that I'd somehow thought about it. From time to time over the course of the day I'd hear and/or visualize that word and hope to recognize more distinctly what it originally alluded to. It might have been prompted by the realization, growing increasingly constant, that we would be leaving Sarasota around the end of week, returning home to southeast Wisconsin. That would certainly put distance between where we had been for over a month and where we would be throughout the end of the year and most of the following year, until we almost certainly would come back again.

The physical distance between the two locations is around 1,329 miles, at least on the highways we used to take when we drove back and forth—we tend to fly now—but I doubt that's the distance I was thinking of. Those are just miles, mere spatial measurements that my old AAA maps and my current iPhone GPS could readily help me track. I suspect that physical space wasn't what brought distance to mind.

The thought of distance possibly arose after a Sunday evening FaceTime conversation with our son in California. Since we were calling from Florida, we added one more time zone to the complication of getting in touch, mid-evening on the east coast lining up with his workday's end on the west coast. We had a good conversation, chatting mostly about the challenges of negotiating recurring computer problems, laughing about his momentarily aligning with our generation in regard to technology while distancing himself from the generation of his nieces and nephews. When we called, he was physically 2,591 miles away from us and from his sister and her family in Sarasota and 2,068 miles away from his other sister and her family in Wisconsin, the ones 1,329 miles north of where we were calling from.

The call ended and distance immediately became less tangible, if communicating face to face through the internet can be considered tangible. We wouldn't talk again for days. He would turn his attention to his daily life, as we would, he to screenwriting and program production, we to Sue's tutoring schedule and my doing—well—this sort of thing. In Florida and in Wisconsin, our daughters and their husbands and their children would be preoccupied with schooling, extracurricular activities, employment, household chores, and time together. We would visit with the Florida gang one more evening and the next day see them in the morning on the way to the airport; we hoped to see the Wisconsin gang when we got off the bus from O'Hare but likely would have to wait a few more days. Close personal distance briefly experienced and enjoyed before we all return to separate preoccupations in our own houses and renew the physical distances we're accustomed to.

Somewhere, probably in something that cropped up in our interactions with everyone over the past few weeks, I started to let go of my sense of distance in terms of where everyone was and recognize it more in who everyone had become—or was becoming. When you live with someone daily, you barely notice the changes in them, not simply physical alterations but also modifications in personality, in their—and your—sense of their identity. Distance in terms of time tends to offer revelations of various kinds when, after long absence, you reunite once more. Children now have clearly become adolescents, their preoccupations and interests have expanded beyond their family lives, their conversations—their very vocabularies—are more mature, more grounded in deeper present knowledge. They rely less on the wisdom and knowledge (and approval) of their parents and grandparents. And the grandparents discover that they can turn for advice or guidance or relevant information to their own children who have become reliable masters of their own fields, their own environments, their own lives.

I used to think of life as something like a solar system: As an infant you are at the center of the system, aware only of the moment you're in, your own identity, your dependence on your parents; then you become an independent adult, a parent yourself, and your parents orbit more distantly as grandparents; then your children grow up, are independent, and become parents and you become a grandparent, often aware of the distance you've come from where you started out and what you used to be. Talking to my children about their work and their lives and observing my grandchildren engaging in their encounters with all of us and the outside world, I recognize that distance is in all of us and has been since we first began to exist.