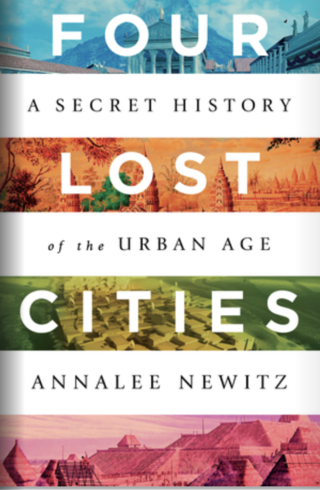 "Augmented Reality" was, for me, an unfamiliar term. I only seen it for the first time online pursuing some connections that started out in my reading. My youthful self once had contemplated a career as an archaeologist until a hot afternoon digging with a spoon in a small square patch of dirt at a historical site made me think the career might not be much like it was in movies like King Solomon's Mines and Valley of the Kings. But interest in ancient sites stayed with me and I enjoyed occasionally being a history tourist. I took in Fort Niagara in my home county, Fort George across the Niagara River in Ontario, and Forts Ticonderoga and William Henry in the Adirondacks (also enduring my siblings' preference, Santa's Workshop in North Pole, NY). Visiting relatives in Cooperstown, I fantasized about the setting for The Deerslayer and made sure to visit Natty Bumppo's Cave and Leatherstocking Falls whenever I could. Where I lived, history seemed only to go back a couple centuries.

Many years later, in the summer of 1982, Sue and I traveled into the southwest where we explored the ancient Anasazi sites of Mesa Verde and Chaco Canyon. It took ten years to complete my essay "Anasazi" in time to publish it in an anthology recognizing the 500th anniversary of Columbus's first voyage to the Americas. Somewhere in those years our wanderings took us to Aztalan State Park in Wisconsin, a National Historic Site that flourished between CE 1000 and 1300, and also to the Cahokia Mounds State Historic Site in Illinois, across the Mississippi from St. Louis. Cahokia and Aztalan both centered around earthen mounds, Cahokia's scale far more massive than Aztalan's, and clearly they were related. I've gone out of my way to visit midwestern mound building sites—Effigy Mounds in Iowa, Serpent Mound in Ohio. Wisconsin has the most abundant mounds in North America and over the years here we've tracked down many of the most prominent sites still surviving.

In all that time I've only written that one essay about such ancient cultures, but I've read the writing of others about them, most memorably Reg Saner's Reaching Keet Seel: Ruin's Echo and the Anasazi, Elizabeth Dodd's essay "Cahokia" in Prospect: Journeys and Landscapes, and her writing about Chaco Canyon in Horizon's Lens: My Time on the Turning World. So it shouldn't be surprising that Annalee Newitz's new book, Four Lost Cities: A Secret History of the Urban Age, caught my attention. It recounts the author's visits to four significant archaeological sites: Çatalhöyük in Turkey, which thrived from 7500 to 5700 BCE; Pompeii in Italy, 700 BCE-79 CE; Angkor in Cambodia, 800-1431 CE; and Cahokia in North America, 1050-1350 CE. The chapters on each site open with a map drawn by Jason Thompson that I find myself turning back to often as my reading progresses.

The book is fascinating, drawing on a breadth of knowledge about each city that has accumulated over years of on-site research. When I started the section on Pompeii, I paid attention as if this were a class in archaeology. The book cover colorfully offers strips of illustrations but, other than those maps, no further images appear to help me picture what I'd see if I were accompanying the author on those visits. Because I'd once been to Cahokia, the location that drew me to the book in the first place, I went online to see what images I might find. Surely that historic park would have undergone changes in the decades since I'd first seen it.

And that's where the idea of "augmented reality" comes in. In any number of museums and historic sites, I've rented audio guides to accompany my viewing, but when I entered the Cahokia Mounds Website, I was immediately informed about the Augmented Reality Project, a video guide to elements in the park. At carefully mapped locations visitors can link on iPads or iPhones to digital sites that will allow them to view the landscape in front of them and then transform it into a visual reconstruction of the site as it might have appeared seven to nine thousand years ago. The images alter—augment—the reality before your eyes, so that you might have the sense of being at Cahokia as it once was, simultaneously seeing it both now and then.

Another trip to Cahokia, about 5 hours away, means taking close to a full day to augment reality as thoroughly as I possibly could. I wouldn't simply be sight-seeing—I'd be engaging in time travel, visiting not only the remains of a lost city but experiencing it, on one level, in its own time. Given the times we're living in, I'd very likely feel like a visitor from the future arriving in an augmented present.