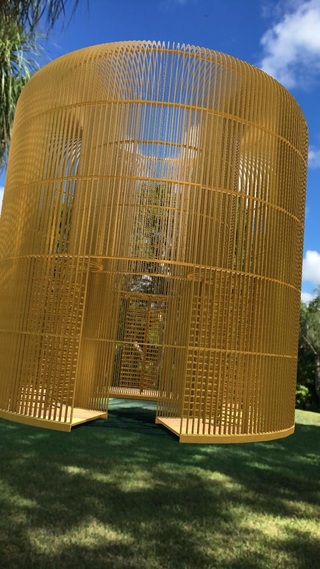 I recently toured "Seeing the Invisible," billed as "An Augmented Reality Contemporary Art Exhibition," at Marie Selby Botanical Gardens' Spanish Point campus on Little Sarasota Bay. We'd walked its 30 acres of varying historical and environmental sites several times over the years—entered its "Window on the Past" archaeological exhibit within an ancient shell midden; checked out the pioneer history also preserved there, a few buildings carefully restored; and strolled well-maintained formal gardens and lawns. A twisting walkway extends partway out a wooded peninsula (the Spanish point) and bridges a cove to further historic buildings and gardens. Spanish Point is rich in botanical variety, small signs identifying plants and trees everywhere, and the landscape abounding in butterflies. It felt odd this time to walk around Spanish Point and not pay ardent attention to the landscape.

"Seeing the Invisible," which will run until August 2022, features works being simultaneously displayed in five other countries—Australia, the United Kingdom, Canada, Israel, and South Africa—and five other states. Developed by the Jerusalem Botanical Gardens, it highlights works by thirteen artists of varying international heritage. At each site visitors who have downloaded the exhibit app (preferably before arriving at Spanish Point) can stand near a numbered sign to open up a scan of an artist's presentation and hear audio accompaniment. The first site opened on Daito Manabe's "Morphecore Prototype AR," showing, the online guide tells us, "an endlessly dancing digital figure, continuously morphing into new shapes." All the while I could see the wooded garden behind him. Juno Enoch, the box office attendant who helped me activate my app, had led me to that site and when she indicated something behind the contortionist, her physical hand entered the digital image.

Out on the point, in a sunken garden with a pergola, I opened "Dawn Chorus," Sarah Meyohas' presentation. A player piano appeared in front of me from which birds "seem[ed] to trigger a series of musical phrases . . . Watercolors bloom[ed] across the surface of the piano, visualizing the movement of the birds as well as the sound waves that emanate[d] from the vibrating strings." I stepped away from the piano, then nearer, then from one side to the other, occasionally glancing away from my phone to assure myself that no piano or birds were actually in front of me.

Not far from the sunken garden, on an open lawn, other visitors investigated Ai Weiwei's "Gilded Cage," appearing as a huge circular wooden structure with open entrances on either side. One woman trying to walk through it disappeared when she reached the wall. I moved my phone up and down to scan the height of the walls, then circled the cage, confirming that it was fully three-dimensional. Weiwei had made his augmented reality project from an earlier physical work he had constructed. On site it seemed fully real. Further out the point, at the end of the walkway, I tuned into a 3-D scan of "a snake-like creature entwined with a dry cactus," Jacob Kudsk Steensen's "Water Serpent," and watched it writhe for several minutes as its global eye turned toward and away from me.

Before my iPhone overheated and shut down (exhibitors recommend bringing a charger on your walk—I didn't), I viewed two works on open lawns. Timor Si-Qin's "Biome Gateway" displays "a temple cave that connects the biotopes and organisms of the botanical garden to a parallel universe," part of the artist's "long-term meta-project" reacting to "climate change, global pandemics, and biodiversity." An open portal invites entrance. Sigalit Landau's "Salt Stalagmite #1 (Three Bridges)," a tall, sprawling structure that made me back ever further away to take it all in, "derives from Landau's original idea of building a floating salt bridge over the Dead Sea to connect Israel, the Palestinian Authority, and Jordan." Until I opened those scans, I found myself in the midst of lively large butterflies and moths, reminding me that I'd previously come to Spanish Point for the natural environment, the woods and the gardens and the views of the bay.

I shut down the app and un-augmented Spanish Point returned to view, the small AR number signs barely noticeable. I'd been only slightly uncomfortable walking through a garden looking at my phone, pleased to have had the reality of a familiar place modified in the way it had been, impressed with the quality of imagination in the art, and uncertain how to feel about their impermanence. How much of the digital future should I be willing to accept as a permanent addition to the past? When I visit Spanish Point again next year, after the exhibition has ended, I wonder how many of those images I'll still be able to visualize, and how often in the future we'll accept having reality augmented.