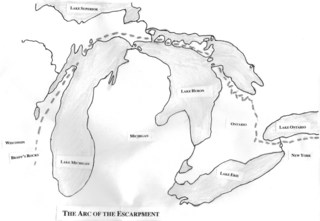 When a publisher recently accepted my book about the Niagara Escarpment, expecting to publish in a year or two, I started rereading it. I needed to be specific about its history when I added entries to my Escarpment Log, so I opened that file to the first entry, dated March 18, 2013. I'd forgotten some particulars of how the book got started; reading the earliest entries reminded me how much a book may have a rather haphazard origin.

That first entry claims that, while lying in bed the day after having completed an advanced draft of another project, I thought about the mention I'd been making of an escarpment book over the past several years and decided to start this log as a way to figure out what information I had and what I needed to have "if I were to do such a book." I had journal entries about escarpment sites in Wisconsin, photos from a trip to Michigan's Drummond Island, the draft of an escarpment essay set in western New York, and a potential subtitle, A Personal History. By the end of March, I'd begun to imagine what an escarpment book would be like and to plan how to get material; April 1st's log entry was essentially a draft of the manuscript's prologue; in September I reviewed substantial research entries I'd made.

I scrolled a long way ahead to the October 25, 2018, entry where I claimed to have finished a full revision of the manuscript: "By my present count The Arc of the Escarpment runs 88,685 words and 350 pages, 357 with Acknowledgements and Works Cited, which I tightened up today." I thought pruning it down from 100,996 words and 383 pages had improved it and I had begun to submit selective and intermittent proposals to publishers. My subsequent submissions files—three different versions—record four outright rejections and a great many silences, until the end of 2021 when Cornerstone Press offered me a contract.

There's a hitch. The manuscript is still too long. I need to cut it down substantially. I'm not so much worried about shortening the book further than I did in the past but uncertain about what I'll be changing. Much of this kind of self-editing involves not merely deleting words or sentences but also replacing longer stretches of words with shorter ones, tightening up ideas already expressed, making substitutions as well as eliminations. The joke I've repeated too often suggests copyediting by removing every instance of "the" and "of"—Escarpment Arc in place of The Arc of the Escarpment, for example—not to mention "is" and "and" and "a," and using "I'm" and "I've".

I last read the book maybe two or three years ago. A curious thing happens when you've been that long away from your own manuscript. It seems less like your writing, more like someone else's. You don't tend to spot passages where you think, "No, what I meant to say was . . ." because the prose strikes you almost as if it were another writer's expression. You need to read the manuscript entirely to be certain what the author is driving at, how the various parts fit together, what the cumulative effect of its chapters adds up to. You may not completely recognize yourself in what you're reading.

For example, at times I will reread a long sentence and start wondering how to condense it but then realize it sets up a sequence of sentences leading into other sentences that follow it; it's expressed exactly the way it is in order to develop a thread of specific ideas or a certain narrative immediately after it. Revising won't simply be getting rid of something superfluous—it will be replacing something essential in fewer words than expressed in the previous revision.

To figure out where things stand, I've gone through the manuscript, correcting obvious errors like spacing problems or occasional misspellings and counting the words in each chapter of each section. The sections include a prologue and an epilogue, nine introductory segments, and 25 chapters. Two days ago, at the end of the sixth section and the 20th chapter, I reached my preferred word count for the book with three sections, two introductory segments, and five chapters yet to be reviewed. Yesterday I completed the word count for those portions. Today I know roughly how many words I need to delete—the equivalent of two segments and five chapters and the epilogue. All I have to do now is delete that number of words throughout the entire manuscript, shortening everywhere so that the epilogue ends at the exact number of words where the 20th chapter now ends. Piece of cake.

I wonder how many "the"s and "of"s are in the manuscript.

I cut 100 pages from my novel just before submitting it. I was afraid it was too long and moved too slowly. I think I was right. My first pubished academic article was 35 pages and accepted with the caveat that I cut 10 pages. I asked where they’d like me to cut. They said, politely, “We don’t think you need to cut content.” OUCH! But I did it without cutting any content, and it was the best lesson in editing I ever had. I needed the publication. So I had to do it. And in the end, it was a better article!

Thanks, Mary Beth. I should be familiar with this process but I appreciate the reinforcement you've given me. Best.

Best wishes! A famous Mark Twain quotation comes to mind: “I didn't have time to write a short letter, so I wrote a long one instead.”