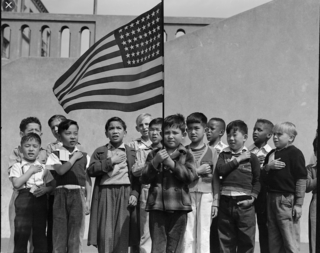 One recent morning another one of those coincidences I tend to notice occurred at breakfast time. In the May 18, 2020 issue of The New Yorker Peter Schjeldahl reviewed an exhibit of Dorothea Lange's photos on the Museum of Modern Art's website, one of those virtual tours our pandemic times encourage. Over twenty years ago I'd read about Lange in Robert Coles' splendid Doing Documentary Work, then examined online holdings of her photos at the Library of Congress and began using some of her images, including the "Migrant Mother" photo Schjeldahl discusses, in writing courses I was teaching. He devotes a paragraph to Lange's pictures of Japanese Americans sent to internment camps during World War II, "work that was commissioned and then suppressed by the federal government."

"One of the best known is a shot of children, Japanese-Americans and others, with hands on hearts, apparently reciting the Pledge of Allegiance," Schjeldahl tells us. "Lange's images show the detained as regular people who had to cope with an outrageously unjust confinement—and who, in doing so, were buoyed by being together, at least." He claims that "Lange was a poet of the ordinary but imperious human need, under any conditions, for mutual contact." When I closed the issue, I saw again the cover display of a dozen separate images of young people in graduation dress all wearing face masks—"Class of 2020" by Anita Kunz. It made for a timely juxtaposition.

Ordinarily, such a review would simply send me to view Lange's photos online, but I'd also been reading sections of Dear America: Letters of Hope, Habitat, Defiance, and Democracy, edited by Simmons Buntin, Elizabeth Dodd, and Derek Sheffield, a collection of "letters to America" published since 2016 at Terrain.org. After breakfast I happened to open the anthology to "Aperture: A Photoless Photo Essay" by Traci Brimhall. Her essay consists of a series of eight short segments each composed of two paragraphs, the first subtitled Image and the second subtitled Caption. The Image paragraph describes a photo and the Caption paragraph explains and reacts to the picture. No photos are attached to the essay. Her third segment at first startled and then engrossed me—it centered on two of Dorothea Lange's photos of the WWII Japanese internment project.

Brimhall introduces the first image as "Rows of barracks and a dust storm moving through them" and then starts the next four sentence fragments the same way: "Dust through . . ."—floorboards, broken windows, "the unfurled American flag straining at the pole," "the clothes of the two Japanese Americans running through the dust roads between the barracks." She describes the second image this way: "A father posed with his family. A tag looped through his coat buttonhole, the child next to him, tagged. The child in front of him, tagged. And the other child. And the other child. Each one staring unsmiling except the smallest child who watches someone the camera cannot see. Their bags labeled with their surname and a symbol to reunite them someday." In the Caption section Brimhall explains how the War Relocation Authority, which recruited Lange to take the photos, impounded them after they were submitted and stored them in the National Archives. Brimhall surmises, "When they realized the photos were sympathetic portrayals of Americans moved into horse stalls, standing in line for hours for food, weaving camouflage nets to help the war effort, the WRA realized the images must remain unseen." They only resurfaced in 2006. Brimhall asks, "Dear Unlooking America, it embarrasses me, but when a mirror teaches us who we are, do we ever believe it?"

Other segments in the essay treat images from the Manzanar Concentration Camp in California and the Gila River Concentration Camp in Arizona, built on a reservation—she calls it "A prison on a prison." Fort Sill in Oklahoma, she tells us, has been a relocation camp for Native Americans, a concentration camp for Japanese Americans, and, recently, a detention center for migrant children. In one more contemporary segment, the image paragraph details drawings by children released by the Border Patrol from a detention center and asked to draw their experiences before being transferred into a "respite center." "The Smithsonian expresses interest in acquiring their drawings as artifacts." Brimhall claims to be "disturbed that we need images to make us pay better attention," which partly explains why this is a "photoless photo essay."

And yet the words Peter Schjeldahl and Traci Brimhall find to describe the images they've scanned closely don't simply recreate them but interpret them in ways that reveal how the images affected them. Consequently, their accounts of those images impact their readers by making them visualize what these writers were viewing. If we were to view those images after reading their accounts, we would likely see them in much the same way. The question is, if we had seen them without those descriptions, how would we have understood them?

An aperture is an opening in a lens that lets light pass through. The images are apertures that let our history appear and, like any image, what we see depends on the setting of the aperture. It changes when we no longer see the image in isolation but view it among others, perhaps across time, in an album. Or even in a photoless photo essay.

LIneage: Reading the Past to Reach the Present