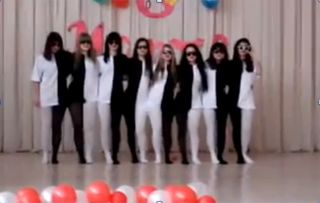 One of my weekly habits is to sit down with the new issue of The New Yorker the afternoon I fetch it from our mailbox, deliberately ignore the table of contents, and then read every cartoon in order, page after page. If my wife is nearby and I come upon a cartoon that seems pertinent to her, maybe reminiscent of something she mentioned or a conversation we've had, I'll show her the image and let her read the caption. Sometimes a thematic undercurrent seems to run through the cartoons, as if they were in tune with issues of the day or the psychology of the cartoon editor, and sometimes they seem entirely randomly selected, unrelated to one another. Sometimes, as often happens with whatever we encounter in our daily activities, a cartoon will set a chain of memories and reflections in motion.

That happened with the December 30, 2019 issue, entirely devoted to cartoons and to humorous prose. On page 39, a comic drawing by Paul Noth showed two female figures—or possibly three. The young woman on the left seemed etched from a late nineteenth-early twentieth century magazine illustration. The figure on the right was a perfect replica of a classic 1915 optical illusion by William Ely Hill, "My Wife and My Mother-in-Law." It contains both women at once—the "wife" turning to look behind her (in Noth's drawing she faces the woman on the left) and the "mother-in-law" seen in profile. It's a famous ambiguous illusion, like Rubin's Vase, an image from the same year that is simultaneously a white vase in a black background and the black profiles of two men facing one another against a white background. Noth's interpretation of Hill's illusion has one woman telling the other, "I'm turning into my mother." It's essentially an homage to the earlier illusion but it adds a different psychological dimension. For Hill the ambiguous figure is simultaneously his wife and his mother-in-law, as if the illustrator as husband is aware of the resemblances that age heightens; for Noth the speaker is the daughter acknowledging changes in herself, adding another level of ambiguity, since the changes may not be only physical—notice how dour that older woman seems, compared to the fashionable adornment of the daughter.

As it turns out, the Noth cartoon didn't simply remind me of those ambiguous illustrations of the past; it took me back at least seven years to a time when I downloaded the Hill and Rubin images to add to a slideshow I planned to run in a summer residency writing class. The images were really background, establishing the tradition of optical illusion art before projecting images from a video of eight young women dancing onstage to a German polka-rock recording titled "Tanz" by the group Hiss. The women are dressed in alternating outfits with one white side and one black side, the white of one linked to the white of someone next to her and her black side linked to someone on the other side. They have to coordinate their movements even coming on stage since they have their arms behind one another and their costumes are all connected at the hips. When the music starts the dancers have to move their legs, all white legs together, then all black legs together, but since different dancers have those colors on different legs, some left, some right, their movements create an optical illusion. The audience cracks up all through the number. Since then I've discovered a number of other performances like this from different groups, some male, some female, some mixed-gender, and I get the feeling that this is a popular amateur chorus line act.

When I put the talk together, I'd been focusing on the idea of ekphrasis, the art of writing about images. I would start with famous poems like Keat's "Ode on a Grecian Urn," William Carlos Williams' "Landscape with the Fall of Icarus," W. H. Auden's "Musee des Beaux Arts," and Patricia Hampl's "Woman Before an Aquarium." I would also show music videos to reinforce the possibility of ekphrasis extending into other forms, such as visualizing a poem or a song lyric. I located the German lyrics to "Tanz" and found a translation, and it inspired me to try writing my own poem about the "Strumpfhosentanz" video. Google Translate tells me "Strumpfhosentanz" in English would be "Pantyhose Dance." I think I'll stick with the German title. This is my ekphrastic poem:

How elusive the illusion
when made so vital—
and by now viral—
as if strobe lights
had come to life,
become Rockettes
for polka-rock.

Shifting focus without
the blink of an eye,
repeatedly startled
by what I comprehend
that is at the same time
what cannot happen—
and happens,

as if, in Hill's cartoon,
the old woman suddenly
smiles while the young woman
turns ever so slightly,
as if Rubin's vase becoming
the faces becoming the vase again
were somehow animated.

My allusions elude me,
my optical ekphrasis
mere delusion.

How elusive the illusion;
my ekphrasis applauds delusion.

This is something I've only done once, to this song and this video. I think this is the way ekphrasis works—something in what you see sets off something within you and you give voice to it somehow, in a poem, a song, an essay. If you watch the video linked to the image and listen to the song, I hope you'll sense the way they inspired my response. They may even inspire a response from you.