Essay Meets Image: Half in Shade 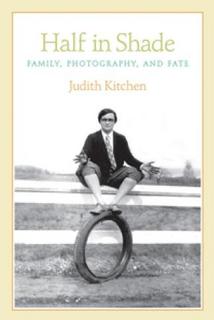 Genre crossing happens more often than we realize in literature. Such forms as the prose poem, the lyric essay, or the haibun or prosimetrum blurring or coupling nonfiction and poetry; they fuse elements of one literary, text-based genre with another literary, text-based genre. Another form of genre crossing creates what are sometimes termed the visual essay and the video essay, forms I label as imagessay. Here we're blending disciplines, combining a form of visual media (photography or cinema) with a form of literary nonfiction. We're familiar with nonfiction as essay or literary journalism or narrative text; we're familiar with thematic exhibitions of photographs and documentary films and television shows. The idea of a visual or video essay—an imagessay—a balancing of images with text, shouldn't seem alien. Like an ekphrastic poem in which a poet reacts to and/or interacts with a work of art, the imagessay is often similarly concerned with examining the response that an image prompts in the essayist. Consider works by Judith Kitchen, for example.

In Half in Shade: Family, Photography, and Fate, Judith Kitchen, working from a "haphazard collection of boxes and albums [. . .] my mother had managed to save from the floods," set herself the challenge "to give 'voice' to what is inherent in the visual" and "to keep the visual from dominating, making all my thoughts redundant." She used the photographs "as triggering devices," trying, as she says, "to interact [. . .] to animate and resurrect." The cover image is repeated in the book as the subject of "Young Woman on Fence," an interrogation of an image of a young woman in glasses, shirt, tie, sportcoat, and knickers perched on a white fence with her feet resting on a narrow tire. Kitchen examines the composition of the shot, the significance of the pose, the clues to the circumstances. Her mother has not identified the woman or the place or the date and Kitchen speculates about her garb, her attitude, her background and her aspirations. The speculation leads to reflections on her own childhood: "I learned how to be a boy from my books. [. . .] To be a boy was to be free from the eyes of those who told me who I should be." It may be that all ekphrasis exposes the individual interpreting what is viewed, but here and throughout the book the generally short essays repeatedly wonder about the mother's relationship to the people in the albums and reflect on the author's sense of her mother (and other relatives) as well as her own sense of herself. In "Who" she envies an unnamed girl in a photo standing among chickens by the side of a house, with a chicken perched on her left shoulder, and reflects on the farm environment that likely existed "off-lens." "I want this moment," she writes, "but not what it stands for. Want one minute of overlapping shadow, one slapdash second of light. Quick, while she has a perch on pleasure." In "Where" she compares her childhood to that of a young girl in a photo standing with her grandfather in a cornfield—the girl and the author would have been the same age in the same year and their environment but not their family life would have been similar. In other segments she considers photos of her mother and of other family members and eventually one photograph of herself sitting on the bottom of a stepladder with a friend sitting at the top. Throughout the book we need the images to understand what triggers the prose and we need the prose to understand why the images are there. The relationship is symbiotic, harmonious, hybrid.

In an imagessay we can't separate the image from the essay, any more than we can separate the prose from the poem in a prose poem. The aesthetic questions to ask are whether the visual elements enhance the meaning of the text and whether the verbal elements enrich our understanding of the images. In an imagessay the relationship between image and text is symbiotic, each serving the needs of the other, as if ekphrasis might also involve the image's reflections on the text. Whenever we open a site online drawn by the promise of a text, we usually will be presented with an accompanying image. I've had some of my prose published online but haven't always had any say in the image that I also discovered there, something an editor added, perhaps because every site requires a picture. The question I tend to ask myself is, what does this image have to do with the text it accompanies? If the connection is simply random the image is merely an illustration and the work is not an imagessay.

Footnote: The ideas in this entry and the next are drawn from a longer article, "Essaying the Image," in The Essay Review Issue #2 (Fall 2014) 95-106. Half in Shade: Family, Photography, and Fate by Judith Kitchen was published by Coffee House Press in 2012.

I often think of the essay as a magpie form. Ill-defined in itself as a genre it likes to borrow from the other arts. I have been reading Patrick Madden's Disparates and he has essays made out of accrostics, captions to drawings, cliches split and freshly re-combined. And the poet Claudia Rankine has teamed up with film-maker John Lucas for intriguing, often disturbing essays on race. I myself am interested in blurring the line between poetry (my first love) and prose (my enduring one). To me the combinations, while they sometimes don't work, are invigorating.