Once Upon a Tender Time 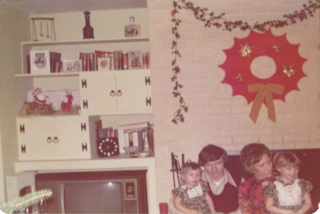 Note: What follows here is an example of an imagessay taken from "Once Upon a Tender Time," a chapter in a memoir in progress by Amanda Irene Rush, presently titled The Gathering Girl. It strikes me as a solid example of the way an image sets off the need for written expression. I thank her for letting me post the manuscript here.

I have no memory of the four of us, as a family, together. All I have is this photograph my sister obtained after our mother's death. The photo had been buried among many other photographs in a box my sister ended up carting from Colorado to Alaska to South Dakota and finally to Ohio. This picture, taken at Christmastime 1973, is a small but epic find. Enduring proof that once upon a tender time we were a family.

In the photo, we are sitting on my father's parents' hearth in their house in Norwalk, Ohio, a red felt wreath hanging above our heads. The wreath -- made by my Grandma Hoyt -- gets as much attention as we do in this throwaway. In our current digital age, it is the shot that would've been deleted straight off. Where's the good family Christmas portrait? The one where we are centered and focused, all smiling at the camera, looking like a family should look? It's nowhere that I can find. Having dug through all the boxes and emptied all the envelopes, having flipped through all the albums and searched every drawer, I have found only three photos of the four of us; and this one -- this dud dug out of a box my mother kept until her death, this dud my sister saved from the trash heap -- this is the only one remotely worthy of mention.

I call this picture an epic find as though I've never seen it before. But I'm sure I have. As a child, I spent hours poring over photos trying to make sense of who my family once was, where I came from. Revisiting this picture, I recognize it as I do all of us. I recognize the surroundings in which we're posed. Everything is familiar. If I concentrate, I can even conjure up the smell of my grandparents' house. The woodsmoke from the fireplace. The sour smell of my grandparents' holiday cocktails. The new fabric smell of those matching Christmas dresses.

And yet, everything seems so strange. Is that woman holding my sister on her lap really the woman who will leave my father with us in tow in just a few years' time? Will she really end up developing a chronic mental illness and disappear in ways I never imagined possible? Is that man holding me really the man who will, soon after our leaving, marry a woman who will make it her life's mission to turn him against us? Will he really, after this second wife dies, quietly drink himself to death? And these two girls. Are these the girls who will grow to feel that they never had either parent? That they only had each other?

The picture leaves me feeling as bewildered as I look in it. I find it hard to believe we were ever a family, despite the proof. I find it equally hard to imagine a time when my parents may have liked each other; they were so different. And yet, there's a sense of intimacy about the way they're positioned in this photo. Perhaps it's only a sense of familiarity I see. In the same box, I found similar pictures of two of my father's three brothers, each Hoyt boy staged the same -- on the hearth, beneath the wreath -- with his young wife and children. Although choices would be made in the years to come that would cause all these marriages to fail and the families to scatter like so many seeds, on this day, at least, everybody knew where and what they were supposed to be.