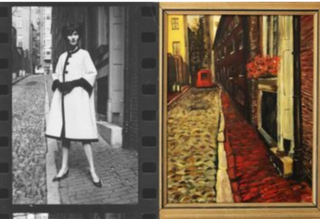 Look closely at these two images for a few moments. What aspects of them are clearly similar? What aspects suggest to you that the photograph and the painting have identical settings? What aspects are dissimilar? The visual media certainly differ and elements of the art forms themselves will affect how you view them, but if you had to define the relationship between the two pictures, what would you emphasize? If the positions of the images were reversed, so that the painting were on the left and the photo on the right, would that alter your sense of their relationship? Is there anything in them that suggests sequence to you? Only the images themselves give you any sense of context. Could the setting of the photo have been chosen in homage to the painting, inspired by it? Or could the painting have been prompted by the photo? If we recognize these images simply as a fashion photo and an urban landscape painting apparently drawing on the same setting, we might be challenged to interpret their relationship further beyond comparing artistic elements that both connect and isolate them from one another.

The images were provided by Elizabeth Kadetsy, author of the prize-winning memoir The Memory Eaters, to accompany an essay posted recently online at salon.com. The photo was taken by the photographer Martin Cornel and the painting was created by Solange Langelier, Kadetsky's grandmother. In the Salon essay, Kadetsky tells us of her fondness for visiting her grandmother's house to explore her art room. She thought her grandmother was a "wonderful painter" of still lives and urban landscapes and she was inspired by her to become an art major when she went to college. Elizabeth's mother owned one of the grandmother's paintings, "a view up the hill on cobblestoned Beacon Street in Boston with a red delivery van at the end"—the painting she shows us in the essay. After the grandmother's death Elizabeth hoped to be given more of her paintings by the uncle who moved into his mother's house but, other than knitting needles and yarn, he gave her nothing, except for "a fierce look when I pressed for more."

The essay alludes to a family secret that may be the basis of her uncle's animosity toward her mother and may also be connected to the nature of that Beacon Street painting that Kadetsky hangs across from her bed. The secret had to do with a childhood injury that may have led to Kadetsky's aunt developing epilepsy and dying young. Kadetsky thinks the injury was the result of her grandmother's negligence and alcoholism, not her own two-year-old mother's behavior, but she is also aware that "an undercurrent of blame and shame surrounded my mother" and may have been "the source of my uncle's anger toward her."

In the 1960s her mother had been a successful fashion model in Boston, but eventually her Alzheimer's disease forced her into assisted living, where she died. Kadetsky began preserving many photographs of her mother's work. As she fed that fashion photo into her scanner, she had "a Eureka! moment." She recognized the connection between the photo and the painting. She tells us, "I placed the painting and the photograph side by side. They were a near exact match." She was immediately struck by the absence of her mother from the painting, an absence that she feels was deliberate: "How fitting, I thought, that my grandmother would have literally painted my mother out of the picture. Of the many abuses my grandmother seems to have afflicted upon my mother, this aggression by erasure seemed especially significant."

Kadetsky's essay grounds her conclusion in considerable evidence of family conflict, including her grandmother's alcoholism, the disability and death of her mother's young sister, her mother's Alzheimer's, her uncle's coldness. Here again we recognize that what we see in images very much depends upon what we bring to the viewing of them. As Kadetsky concludes, "One can read a lot into an image. If one looks carefully enough, one just might discover the ghosts of things, the traces one has always suspected of a dormant family secret, the memory of a beautiful daughter twirling in her glee and power before a camera, painted out of a picture but still there to be coaxed from the shadows." This is not what the casual viewer may see but certain viewers will feel the need to go more deeply into the images, and if they go deeply enough, they may experience a personally meaningful revelation. Certainly that happens to all of us with personal or family images of our own.

Note: You can read "A Mother's Vanishing" by Elizabeth Kadetsky here.