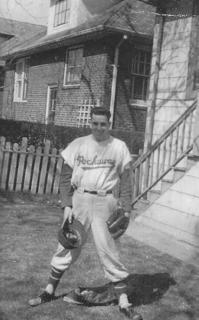 Take a look at this photograph. Try to describe what you see in it.

I'm guessing that your initial attention will be drawn to the figure at the center of the image—his wide-legged stance, his uniform, the objects in his hands, to the degree you can make it out the expression on his face. As you look more closely you may try to read the word across his shirt, which will identify his team, and you probably almost immediately recognized the sport he plays. You may try to examine his hairstyle, which would help you date the picture. There's something on the ground at his feet—what do you think it is? Notice the background of the photo, which suggests where the picture was taken. So far as I know the photo was originally taken in black and white, which may also help to date it. I've labeled it "The Pitcher Picture," which I hope is accurate; if this person is a shortstop or outfielder, I'll have to search for a less alliterative title ("The Shortstop Shot"? "The Outfielder Flick"?) If you want to be thorough in your analysis of this photo, you'll write down all the things about it that capture your attention in as much objective detail as you can.

Once you've stood back from the image and described what you see, think about how you react to it. What impressions of this young person do you get? Is there anything you tend to assume about his attitude, his personality, his mood? What does he want the photograph to record about who he is at this moment? How would you describe the person you think you see there? What in the photo, in his expression, his pose, his context, makes you think that's what he's like? Did you ever (or do you now) know someone like him? Does he remind you of anyone—a friend, a relative, a significant other? Does he remind you of yourself?

All of these questions are intended to help you investigate an unfamiliar image of a person you've likely never met. When we see a photo of a stranger we tend not to examine it so closely unless something about that person or that image attracts our attention. I want to suggest that how I'm asking you to view this photo is how others may sometimes view photos of each of us. Think of your high school yearbook photo—of the two or three poses the photographer offered you, why did you pick the one you did? Who did it show to the world that the other poses didn't? If the baseball player's photo were a photo of you, how would you interpret it from the distance of perhaps decades?

As it happens, the baseball player himself has written a caption for the photo. He writes, "Me in the spring of 1958, wearing my high school baseball uniform—an authentic hand-me-down Brooklyn Dodger uniform donated to the high school by the Dodgers in 1951, right after they lost the playoff to the Giants. I'd wanted this uniform since my sophomore year. Getting one of these from Coach Kerchman meant that I'd finally arrived as a ball player." His remarks help us understand the significance of the photo for him—it records a moment of triumph, visual evidence of an accomplishment that has particular significance for him.

The photo is a high school image of my friend Mike. I didn't know him in his youth—we grew up on different ends of the same state—and I only met him when we were both college professors at two different universities in a different state. But I knew him and worked with him off and on for roughly 35 years, and my wife and I hung out with him and his wife throughout those decades. He was a writing teacher and an editor of a creative nonfiction journal and co-editor (with me) of an anthology for college writing teachers. He was also a memoirist and an essayist. The book that cemented his standing as a writer was Still Pitching, his memoir about his passion for baseball in high school, which contains this image and his caption about it. His final book collected some published essays—in the one titled "Elegy for Ebbets" he visits a host of stadiums while remembering the Brooklyn Dodgers—and some unpublished ones. His intense life-long involvement with baseball dominated his literary writing. This image was also reprinted in an obituary of him a publisher posted online. That long friendship and that thorough reading of his autobiographical writing give me a different perspective on that photograph than someone would have who never knew him or never read him or never encountered that image before. That early pitcher picture is not only about his youth but also about something essential in his nature. He was a player and a coach which, given his writing and his teaching, is what he also was in his career.

It may not happen in all the photos in which we appear, but I suspect that all of us have, at one time or another, posed with a special optimism about who posterity will think it sees in a certain image of us. The question, of course, will be whether any of those viewers (or readers) will see the person you hope they'll see or, indeed, whether you'll see the person you thought you were.

Note: The books by Michael Steinberg mentioned above are Still Pitching: A Memoir, (East Lansing: Michigan State University Press, 2003) and Elegy for Ebbets: Baseball On and Off the Diamond (Mount Pleasant, MI: Pint-Size Publications, 2019).He was the founding editor of Fourth Genre and his website is still accessible with material on his blog by him and a host of guest writers and teachers that he gathered between April 2012 and October 2019.You can find it at  http://www.mjsteinberg.net/blog

I always love your blogs Bob and continue to learn and explore the art of essay from you. Thank you again and am so sorry about Mike.
Lisa Hadden