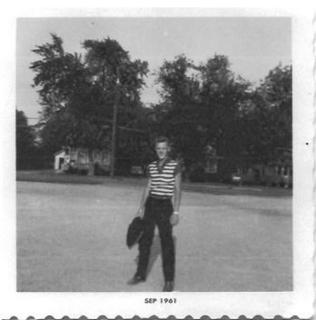 Here's a familiar photo that came to mind while I was thinking about the pitcher picture. Note the similar stance, the similar era of photography (b&w), whatever immediate differences you notice.

You could ask yourself about this photo most of the questions you asked yourself about the earlier photo. Handily, having a second photo offers an occasion for comparison, the similarities and differences in the two helping to sharpen your perceptions and impressions of both pictures. If you had two different photos of either person, you could make similar comparisons, just as you did when you compared your possible yearbook pictures or when you have selected someone else's photo for a celebration or an obituary. Who is the person who is still there in different images of him- or her-self?

I've been treating these two images as if they were images of strangers, although there are occasions when most of us have to examine images of ourselves. But all images of individuals have a further dimension that could be considered. What happens when you know the person in the photo even if the photo itself is unfamiliar to you?

For example, my friend Mike's pitcher picture dates from 1958 but I didn't meet him until a quarter century later, when he invited me to join him in starting a writing workshop for teachers at Traverse Bay. For most of the time I knew him he was mustached and bearded—I looked through photos of the two of us across decades and, after his death last year, I posted images from 1994 to 2013—and the high school photos in Still Pitching show me someone I wouldn't have otherwise recognized. I can't always remember the exact dates of the pictures of the two of us, but I almost immediately recall the occasions and the locales. The pitcher picture deepened my sense of who my grown-up friend was all along.

I am the figure in the parking lot picture. I felt an affectionate amusement when I stumbled on the similarity of our poses in these two photos, taken only a few years apart. As it happens, the parking lot was next door to both my parents' house and a neighborhood park with a baseball diamond so close my father or brother or I would sometimes toss any foul balls that landed in our yard back over the park fence. I had no other contact with sport then. But thinking how Mike's adolescent image speaks to who he was throughout his life, I start to wonder what my image forecasts about me.

The guy in the photo is a high school graduate a year out of school who can't imagine that a year later, as a freshman, he'll begin an educational trajectory that will one day make him a published professor. He'd   always been solitary, usually closeted away to read voluminously and to write private fiction, including a post-high school novel. In that year after graduation he and his friend Dave drove cross-country from western New York to California and, to his surprise, back. I see him there, in what he thought was a fairly dramatic black and white outfit and likely assumed to be a pretty solid stance, and start to wonder if their excursion along Route 66 to Disneyland, Hollywood, San Diego, and Tijuana somehow helped form his tendency to wander and to write about wandering—the lifelong attention to place that led to many of his publications. In all the times I've seen this photo before I never realized it hinted at the man who would be looking at it in the future.

The writing we do in reaction to an image draws so much upon who we are, what we bring to the viewing, what the image connects to in us; journaling the image can be both revealing and rewarding. As it happens, trying to recall the dates that Mike and I ran that Traverse Bay program, I looked in Those Who Do, Can: Teachers Writing, Writers Teaching, the anthology we edited from material written at and about those workshops, and found that my article about my writing group is titled "Writing the Outdoors: From Journals to Essays" and my pedagogy article centers on "Popular Media in the Language Arts Classroom," both written twenty-five years ago. I seem to be still practicing what I once preached.

If Mike had ever seen that photo of me, would he have felt the same way today?

Note: Those Who Do, Can: Teachers Writing, Writers Teaching—A Sourcebook by Robert L. Root Jr. and Michael Steinberg was co-published by the National Council of Teachers of English and the National Writing Project in 1996.