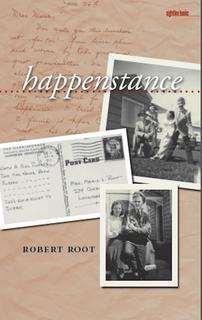 I appreciate the advantages of working with a clear narrative structure, having a straightforward story to tell—"Here's how it started; here's what happened next; here's how it ended." For my first two books of creative nonfiction, Recovering Ruth and Following Isabella, the structure of earlier works determined the structures I built, even though I didn't write my portions as chronologically as Ruth Douglass and Isabella Bird wrote theirs. It's good to follow a straightforward path, the road most travelled; those of us without one can end up on a long and winding road, bushwhacking and breaking trail most of the way.

The subject of my memoir, Happenstance, wasn't entirely one I'd ignored. Decades earlier, I'd written vignettes for broadcast on my local Michigan public radio station based on boyhood memories triggered by adult events: renovating the hundred-year old house where my wife and I now lived brought to mind the dank cellar and stripped walls of my parents' house; watching my children play reminded me of childhood neighborhood friends; and so on. Some vignettes showed up again when I encouraged composition students to write about their childhoods—the street map I modeled to help them reconnect with memory ignited my own memories; the guided imagery exercise leading them into past places propelled me toward mine. One student's story about his mother meeting his father because of a fly ball at a summer softball game haunted me: what if the batter had bunted or struck out? What kind of happenstance brought my own parents together?

Curious about my own family history after researching others', I began researching a family memoir. The material invited a chronological history but didn't answer questions about my own parents and my own life; everything that surfaced seemed connected with everything else. Though I wanted to write a book that would say something to my children about how their father turned out to be who he was, I plunged deeply into genealogy. After months of research and drafting, my wife asked how it was coming. When I told her I was almost up to the birth of my grandfather, she said quietly, "You know, if this is going to be a memoir, you should probably be in it." I loved all the research, but she was right—I wasn't in the book I was writing to explain about me.

I discovered two different ways to focus my attention. Before I assigned students to write caption essays about their family photos, I attempted the exercise myself and was startled by what it unleashed in memory, based on my greater distance from the events. For the memoir I began interrogating family photographs, describing what I saw in them first as a viewer and then as an interpreter. Leafing through family albums, I wrote about the pictures that most interested me. To avoiding a chronological narrative, I also decided to write about the first hundred days of my life that I remembered, in the order they occurred to me. Surely, I could write one a day over the next hundred days. On the eleventh day my father died. I stopped writing but scribbled down a list of possible subjects in case I ever started up again. The list ran well over a hundred items.

Life, and other books, intervened. What stayed with me was the experience of the first day I had written about, a day in elementary school when I ran home from school feeling exuberant. Why had I remembered that day first? Why could I remember no other exuberant days? I soon realized this approach could help me find formative moments in my life. I'd begun teaching memoir-writing to graduate students online and felt I should revive the memoir. To the Album entries and Hundred Days entries, I added a third strand reflecting on the nature of happenstance and the nature of choice. In time I realized happenstance was the dominant theme of the memoir. It also became the title.

Some of the 57 completed entries in the Hundred Days series got in; many Album entries got in; items I thought of as literary remains from my father, mother and grandmother got in; reflections on the nature of happenstance got in. Some days I would lay all these entries in a circle on our dining table or in a straight line on our carpet and hover over them, trying to feel some sort of sympathetic tuning among them, weaving them together through juxtaposition and association, the reverberations one piece of writing picks up from another piece, the synchronicities ignited by experience and memory. It's a memoir but not entirely narrative; it's more the prose equivalent of a medieval polyptych, a multi-paneled altarpiece, made up of words and photographs.

I'm amazed at all the time, energy, false starts, missteps and perplexity this book put me through. No book ever becomes the book you intended to write, of course. When I tell students that the writing will tell you what it wants to be, this is what I mean. It was the only way I could write it—the only way this book would let me write it.

Note: A slightly different version of this entry was first published on Michael Steinberg's Blog on February 9, 2013 as "The Long and Winding Road: A Memoirist's Journey" at  http://www.mjsteinberg.net/blog/archives/2013-02.