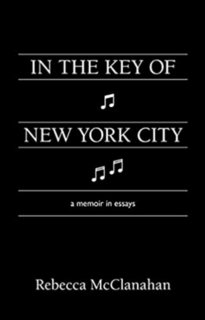 As we struggle to cope with these troublesome, contentious, and too often tragic times, social media keeps us apprised of positive ways some people are coping. From time to time I tune in on Facebook to actors reading children's books, soloists performing from their living rooms, whole choirs harmonizing from multiple locations, whole orchestras and dance companies blending seamlessly from miles apart, and authors giving virtual readings from virtual bookstores. Just this week I read an online interview with one of my favorite authors whose latest book's publication has been delayed by months because of the pandemic.

Rebecca McClanahan's forthcoming In the Key of New York City, originally scheduled to come out in May, will now come out in September. I've admired her earlier books, The Riddle Song and Other Rememberings and The Tribal Knot: A Memoir of Family, Community, and a Century of Change, as well as her writing in literary journals and collections like The Best American Essays. She's a writer I can count on to entertain and enlighten me and I was eager to read the interview about the book posted online by the Rainier Writers Workshop (where she also teaches writing). It made think more about the nature of memoir and essay in current creative nonfiction.

In answer to a question from Sydney Elliott, the managing editor of RWW Soundings, about "the process of compiling the material for this book," McClanahan discusses the challenges of connecting material that often had been published separately "over a period of many years." She began writing some of the essays when she and her husband first moved to New York—one in particular began prior to the 9/11 attack—but "only three years ago did I finally find the shape for the book and begin to revise—often with much violence." I especially appreciate her explanation of the complications of the form she writes in: "A memoir-in-essays is a tricky form. Though each essay should have a life of its own, when shaping a memoir-in-essays, the writer must consider how the essays talk to each other and build upon each other so that together they form something greater than the sum of their parts." Those are lines I keep returning to; they capture the essence of the "memoir-in-essays."

Notice the complications of the interactions among the materials. That "each essay should have a life of its own" suggests independent wholeness while "how the essays talk to each other and build upon each other" suggests the interrelatedness of a cohesive narrative or argument. It may seem contradictory to be pursuing both goals but if successful they can "form something greater than the sum of their parts." That's the challenge of not simply "compiling" such a book but of essentially composing it out of pre-existing parts. McClanahan tells us, "For me, this involved making tough decisions not only about which essays to include (some of my favorites don't appear in the book) but also about what final form the essays would take." Although most of them had already been published, she "rewrote parts of them, cut certain sections, and broke a few long essays into flash pieces and scattered them throughout the manuscript." For one of them, she "dismantled the line breaks to a published poem and rewrote it as prose" when she determined that "the scene described in the poem was integral to the memoir."

McClanahan's earlier book, The Riddle Song and Other Rememberings, influenced some of the more personal books I've written. At least one of them, Postscripts: Retrospections on Time and Place, is essentially a collection of essays of place published over a period of years but the process of "compiling" the material was more challenging than it might seem if you look at the contents. Some essays I'd published somehow didn't fit the tone or the voice of the majority of essays I was trying to tie together and had to be discarded. Only after I'd written some new essays did I recognized the thread that bound them all together.

It occurs to me that I've been reading other "memoirs-in-essays" over the past few years—surely the term applies to Patricia Hampl's The Art of the Wasted Day and Scott Russell Sanders' Hunting for Hope and Peggy Shumaker's Just Breathe Normally. There's a point in certain works of narrative nonfiction where you need to read each section in order—a chapter is, after all, a section, a division, a segment of a whole (Annie Dillard's Pilgrim at Tinker Creek)—and there's a point in others where you can read divisions quite separately in any order, each virtually independent of the others (Annie Dillard's Teaching a Stone to Talk). Somewhere between those points is the "memoir-in-essays," where each piece resonates with all the other pieces, harmonizes with them, accumulates awareness of the author's sensibility and outlook. That's what I'm looking forward to in Rebecca McClanahan's In the Key of New York City.