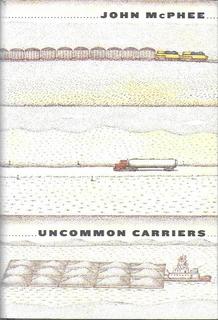 I own all of John McPhee's thirty books published between 1965 and 2018. It may be my longest reading relationship. When I discover a writer who seems to be on my wavelength, I look forward to spending time with him. It's a kind of solitary friendship. McPhee is an accessible writer; I'd taught some of his work to grad students in Michigan along with other essayists, memoirists, and literary journalists. McPhee was the most journalistic of them, reporting on the insights he gained from people in various fields as he gained them; his readers tended to learn with him.

My only autographed copy of a McPhee book, Uncommon Carriers, recounts his travels with, as the dust jacket tells us, "people who drive trucks, captain ships, pilot towboats, drive coal trains, and carry lobsters through the air: people who work in freight transportation." My wife and I lived in Colorado and frequented the Tattered Cover Book Store in downtown Denver when it was published in 2006 and McPhee came through on a book tour, giving me the chance to hear him read in person. I arrived early, bought my copy, and went to the nearly empty presentation room to start reading.

The first essay, "A Fleet of One," recounts McPhee's experiences accompanying the driver of a sixty-five-foot long chemical tanker across country from Georgia to Oregon. Opening with reflections on learning to drive a standard auto, he begins to see the highway as the driver of an eighteen-wheeler sees it. The change in perspective is revealing, especially in regard to what the drivers of four-wheelers don't appreciate about their relationship to eighteen-wheelers and what the drivers of eighteen-wheelers have to be constantly aware of in traffic shared with four-wheelers. After mentioning the first time his trucker used his air horn, he explains:

"In the three thousand one hundred and ninety miles I rode with him he used it four times. He gave a light muted blast to thank a woman who helped us make a turn in urban traffic close to one destination, and he used it twice in the Yakima Valley, flirting with a woman who was wearing a bikini. She passed us on I-82, and must have pulled over somewhere, because she passed us again on I-90. She waved both times the horn erupted. She was riding in a convertible and her top was down."

I reread the last sentence twice and chuckled to myself. Soon the event started, the audience now almost filling the room. McPhee was introduced, gave a quick overview of the book, then read the opening pages of "A Fleet of One." When he read the line "She was riding in a convertible and her top was down," the audience erupted in laughter. He smiled approvingly. At the end of his reading, among a swarm of listeners, I had him autograph the book, muttered something admiring, and headed home, expecting to read further in the collection that night.

On my way out of Denver I remembered how closely McPhee's reading of those early pages had echoed the pace, the shifts in stress and emphasis, the tone of my silent reading of them before his talk began. Almost nothing had varied. I had subconsciously read his prose in silence just as he had read it aloud. That is, we had both "heard" the words and sentences exactly the same way, the way McPhee intended them to sound if they were spoken aloud.

I might have been aware that McPhee tended to read his writing aloud to his wife before submitting it to The New Yorker, where he often published. In the title essay of his collection Draft #4, he explains how a piece of writing will take four or more drafts: the first ragged draft is there simply to open the door to discovery and further reflection; near the end of the second draft, he says, "the feeling comes over me that I have something I want to show to other people, something that seems to be working and is not going to go away." He reads the second draft aloud, then he "remov[es] the tin horns and radio static that [he] heard" during the third reading, and largely copyedits the fourth draft by replacing certain words with better ones. The final draft gets the right words in the right order.

I took McPhee's advice about writing long ago. Writing short scripts for local public radio, I recognized how remote and academic my early ones sounded. Once I began reading them aloud as I edited and revised, I could hear myself sounding more conversational, less like a professor and more like a person. McPhee's Denver reading reconfirmed for me the wisdom of his multi-draft approach. This very post was considerably different in its first draft. As you read it you might be able to sense what it would sound like if you were reading it aloud. It won't sound like John McPhee, but, hopefully, it might sound like me.