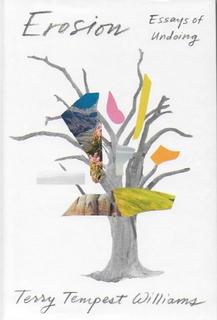 My bedtime reading recently was Terry Tempest Williams' Erosion: Essays of Undoing, a powerful series of reactions to current decimations of the natural world, especially the withdrawal of national parks and monuments from protection against industrial development. I've had a thirty-year acquaintance with her work, beginning in 1991 with Refuge: An Unnatural History of Family and Place. That book is simultaneously a moving memoir about her mother's death and an observant nature study about the devastation wrought by a rise in the level of Great Salt Lake. I admired her blend of lyrically personal and conscientiously informative writing. Since then I stayed on the alert for her later books; in Denver's Tattered Cover Bookstore, I once heard her read from her politically charged book, The Open Space of Democracy.

Williams is not one to simply write the same book repeatedly. Reading a new book by her is often surprising and rewarding in unexpected ways. Leap has a dust jacket with a detail from Hieronymus Bosch's triptych "The Garden of Earthly Delights" and an endpaper that reproduces the entire triptych. Teaching the book online, I sent students to a website at the Museo del Prado, where they could enlarge the image and scroll around in it. Sections of her book correspond to panels of the triptych: the first explores the panel focused on "Paradise," the second the panel on "Hell," and the third the center panel, "Earthly Delights." As you read, you keep checking the artwork for correspondences with the prose. But it's not simply a book about fifteenth century medieval art; she often alludes to Mormon ritual and theology and her life back home in Utah, and in one daringly imaginative segment enters the painting and walks around in it. I taught it to highlight the ekphrastic impulse in literary writing, not only in poetry but also in essays and memoir, and invited students to enter "The Garden of Earthly Delights" on their own, as much as they could.

Having studied medieval literature in grad school, I came to Leap eager to dwell in a triptych, but Williams simultaneously connected me to the contemporary era without difficulty. Her celebration of the centennial of the National Park Service, The Hour of Land (2016), records visits to twelve National Parks. Over the years I'd been to five of those parks: Gettysburg with my father, Effigy Mounds as a grad student, Big Bend and Alcatraz Island with my wife, and Acadia as an artist-in-residence; I'd also had residencies at Isle Royale and Rocky Mountain National Parks. I'm aware of how often I read the kind of books I wish I was writing. Donna Seaman, reviewing the book in Booklist, called Williams "an ardent, often rhapsodic, always scrupulous witness to the living world and advocate for the protection of public lands," and piled on a lot more admiring and accurate adjectives. I notice a slew of dogeared pages in my copy of the book.

Erosion: Essays of Undoing, her most recent book, is every bit as "ardent" and "scrupulous." "profound, poignant" and "clarion" as The Hour of Land, as well as "haunting, powerful and brave," according to Diane Ackerman. To all of that I would add the word "urgent." Much of the book reacts to the impact of a misguided, malicious, and arrogant president ruthlessly dedicated to undoing virtually every positive aspect of American life, not only in regard to environment but also to education, employment, health care, and constitutional equality. Each of Erosion's four sections opens with an essay on the theme of essays that follow: Erosion of Home, Erosion of Safety, Erosion of Democracy, and Erosion of Belief. A two-page map after the preface highlights the changes the Trump administration has ordered to be made to Bears Ears National Monument and Grand Staircase-Escalante National Monument, which President Barack Obama declared enlarged at the end of his term of office, in cooperation with the indigenous tribes that value that landscape in southeast Utah. (David Gessner visits Bears Ears and Grand Staircase-Escalante in his new book, Leave It As It Is, an apt companion to Erosion.)

Williams warns us that, "when it comes to wilderness, 'the open space of democracy' drowns in the wake of greed." Her vision for the country is more spiritual, humane, expansive and inclusive than the indifference and self-interest of our legislatures and our corporations to both environment and community encourages us to feel. By the end of the year we will all know whether her hope for our ability to save not only our society but also the land it inhabits has been rewarded. In the meantime, we have Williams' books to remind us what we have and what we're likely to lose.