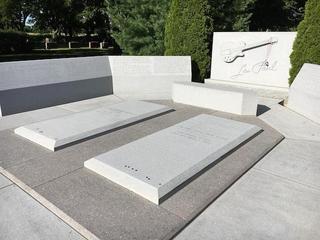 For the second time in three weeks I've come to the Prairie Home Cemetery in Waukesha, to distract myself from waiting for car repairs many blocks away. My treks here have been inspired by the chance to again visit the grave of Les Paul, the Waukesha-born musician who revolutionized the electric guitar and multi-track recording. He's celebrated here all over town with wall murals and colorful, differently themed statues of electric guitars, thirty in all. I still haven't tracked them all down, but I always look for the one with images of Sheryl Crow, Bonnie Raitt, and Heart on it. In the 1950s, when I began listening avidly to pop music, my mother bought a copy of "How High the Moon," the major hit by Les Paul and Mary Ford. She played it so often that it became anchored in my subconscious and I virtually hear it again in its entirety anytime I think of it.

Born in June 1915, Paul died in August 2009, just over eleven years ago as I write this. According to the account of his career engraved in the stone walls around his grave, he and Mary had eleven number 1 hits and 36 Gold Records between 1949 and 1962. Their marriage eventually ended but his influence in the recording industry continued for a long time. One of his later recordings, Chester and Lester, was a dual guitar album with Chet Atkins, the prominent country guitarist and producer. Videos on YouTube record Les performing with younger musicians like Keith Richards of the Rolling Stones and Joe Walsh of the Eagles. Younger guitarists were aware of his influence.

It's not only the murals and artfully decorated guitars that commemorate his career locally. There's also the Les Paul Experience display in the Waukesha Historical Museum and another, grander exhibit, Les Paul's House of Sound, in Milwaukee's Discovery World. There, each time I go in, usually with grandchildren, I watch the 1953 episode of Omnibus, the informative and entertaining television series hosted by Alistair Cooke, that featured Les and Mary explaining how they managed multi-track recording. In the fifties, when we had only four television channels and networks all offered public service programming as well as entertainment, I saw it when it was first broadcast one Sunday afternoon. The exhibit is expansive and inclusive and the episode itself is available online.

Fame is fleeting and life is short (Has anyone else ever mentioned this before?) but I'm always cheered by an awareness that some people—not only presidents but also poets and other creative individuals—are given attention somewhere as a reminder of their accomplishments. Waukesha has a Whittier Elementary School, a Lowell Elementary School, and a Hawthorne Elementary School. My Wisconsin grandchildren live in a school district containing Whitman Middle School and Longfellow Middle School. I like seeing nineteenth-century poets and authors honored in this way, in part because at one time in my life I read them all. Few of those writers are read or remembered today, unless some author revives them, as Mark Doty did in What Is The Grass, his book about Whitman's influence on him, and Nicholas Basbanes did in Cross of Snow, his recent biography of Longfellow. I read both books with considerable pleasure over the past few months.

I don't know how many people have come to Waukesha to visit Les Paul's grave, but I was cheered that Central Middle School was renamed after him. It's okay if modern school kids get to hear about creative artists of the 20th Century as we slide more deeply into the 21st. Every so often I learn about the hometown of someone who is or was prominent. For example, Orson Welles was also born in 1915, a month before Les Paul, in Kenosha, Wisconsin, a little over fifty miles away. When I drive south to Florida again, on our annual ragweed escape, in Indiana we'll pass a stretch labeled John Mellencamp Highway near Seymour, his birthplace, and remember again that James Dean was born in Marion, not that far away. Online I can easily find lists of people born in towns I've never heard of who achieved either fame or notoriety, many whose names I recognize from films I've seen or books I've read or recordings I've heard. The famous tend to live out most of their lives somewhere other than where they were born. Les Paul started his show business career in Waukesha, as a teenage performer named Rhubarb Red, then spent most of his adult years elsewhere, and eventually returned here at the end of his 94 years.

When you discover where accomplished individuals started their lives, you realize that where they began didn't keep them from doing something ambitious, something memorable, as those lives went on. That should be encouraging to people who feel as if they come from Nowhere. It should also be encouraging to people who live Nowhere when some of those people make it known where they come from. I like standing in the sunshine at Les Paul's grave. When I get home, I'll go online to watch and hear "How High the Moon." It's already playing in my subconscious right now.