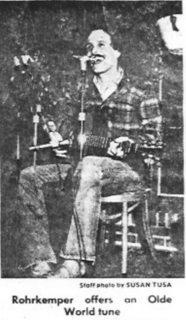 According to the list of titles in my "Root Songs" notebook, the first five songs were written in Iowa between 1970 and 1971, while I was in graduate school, and the remaining thirty-five in Michigan between 1979 and 1981, where I'd been teaching and my wife and I had separated and I'd become a single father trying to figure out how to move on with my life. When I read the lyrics, memories sometimes open up, some fond, some troublesome, but just as often they stay closed—What or who was this song about? Why did I write it? Some songs seem political, the ones written during the Nixon years and the Vietnam era, and some are intensely personal, lyrics about loneliness and change and grasping for meaning, lyrics for my children and my future wife and possibly for people whose relationship with me is ambiguous. Most of them are more personal than public-minded.

My songwriter friend John was on our faculty only a single year; we met in the 1980 fall semester and with Barb, another singer/songwriter, eventually started what we called the Michigan Songwriters Guild. When we performed at Hobie's Olde World, John and I were interviewed by Barbara Milstein for the Lansing State Journal. "'I sit down with my guitar and let the melodies tell me what's on my mind,' Bob Root said. 'Going from music to words is easiest for me. I always seem to have an idea in my mind. If I don't put it down as soon as possible, I'll forget it at the end of the day. I've probably lost more than I've written.'" The interviewer explained, "Root tends to compose introspective music—exploring the beginnings and endings of relationships. It's 'sort of like a narrator sitting back, thinking about and looking at his own life.'" She thought my song "The Highway Calling Me" "sums up its thought with the line: 'You're never more a prisoner than when you're really free.'"

I was influenced by songwriters I tended to listen to, mostly folk-oriented singers. My songs were often about trying to move on and come to terms with my life, and I sometimes introduced "Highway Calling Me" by referring to "Bob Dylan's 115th Dream" and claiming mine should be "Bob Root's 13th Road Song." John and Barb sometimes suggested we each write a song in the vein of another singer or from an outlook not typical of us. I wrote some satirical lyrics, like "God Bless America (Bless Her Guns and Tanks)," and the rowdy country-flavored "Free-Rolling Man," with the lyric "The barroom queens in the barroom scenes/check your bankroll while they check your jeans." I worked on one lyric for a long time until I realized I was composing new words to a melody by the Lovin' Spoonful; it made me aware of my limitations as a musician. It also made me aware that I didn't want to write poetry that didn't have a tune underlying it.

The lyrics that affect me most are those that grew out of my situation in the years I wrote them. The ones about lovers separated were inspired by Sue's working for two years in Missouri while I still worked in Michigan. I can tell how far along we were in our relationship by some of the lyrics: in "The Words I Long to Hear" the narrator claims, "And now I'm on the Greyhound and I'm staring at the road/Thinking of the time we'll be apart/And thinking where you'll be the time you're not with me" and his need for confirmation and assurance is clear; "Spending Time" is a declaration of commitment and longing, as in the opening verse:

I know too much of wasted days

I know how much they cost

But counting all the empty hours
can't measure what I've lost
If time is really money, girl,
I know where you should be,
lying here right by my side
spending time with me

I'm pretty pleased that I can revive the melody in these songs and several others by reciting them aloud—something of rhythm and emphasis and pace surfaces as I do—and I'm disappointed that trying the same approach with others brings back no sense of their original tunes. I've found some scribbled sheets with musical notations for some songs in that same box of manuscripts and hope to locate those tape recordings of some of them. I'd like to know just what I was searching for on every level of the songs I used to write.