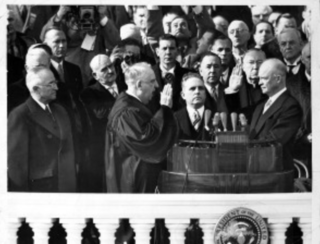 On the night before the inauguration of Joe Biden and Kamala Harris, partly anxious about potential disruption the next day, memories of earlier inaugurals kept me awake. I didn't expect to have them surface, but memory often decides on its own what you should think about.

Biden is the 46th president since our first, George Washington. As someone pointed out the next day, inaugurations have occurred every four years without fail for 232 years, a total of 58 altogether. Biden is the 15th to be sworn in during my lifetime, his inauguration the 19th I might have witnessed. I was barely two years old for Franklin Delano Roosevelt's third inaugural, and though I might have later heard about FDR's fourth one and his death and Harry Truman's victory over Thomas Dewey, it wasn't until Dwight David Eisenhower's inauguration that I was in any way a witness.

My family leaned Republican politically. My father, my uncles, and some aunts had seen military service during World War II, conflicts between North and South Korea were heating up, and everyone I knew "liked Ike," a celebrated general. Eisenhower was inaugurated in January 1953 and, for the first time, we could witness it live on television, as it was happening, rather than wait to read about it later in newspapers or magazines like Life.

I saw it on the small television screen in a large wooden cabinet in the house of friends. We clustered in front of it until urged to clear away so everyone could see the screen; the sound of on-screen speakers alarmed their little dog Maggie and she barked and growled at the machine until they put her outside. I don't really remember much of the ceremony.

It was a grand year for pomp and circumstance. About six months later we watched the coronation of Queen Elizabeth II, a somewhat grander occasion than the inauguration. I made sure to buy the View-Master slide reels of both events so I could see images of them over again. I probably watched Ike's second inaugural as well but don't recall View-Master recording it.

In 1960, when John F. Kennedy campaigned in our town, I saw him among crowds on the Big Bridge over the Erie Canal but didn't pay much attention. By the election my friend Dave and I were in the Southwest and, returning across the border from Mexico into California, we were asked by an official whom we'd voted for. When I told him I'd have voted for Nixon, my family's choice, but was a week and a half too young to vote, he approved, told me I was also too young to have crossed into Tijuana on my own, and cheerfully sent us on our way.

I started voting in college, somehow more liberal than my parents. The Vietnam War, which I was against, determined my politics. In the 57 years and 15 elections I've been allowed to vote in, my preferred candidates served 24 years, my rejected ones 32 years. At one point I felt as if my vote jinxed the candidates I favored.

If I review my lifetime voting record, I'm aware that I haven't been strictly partisan. I've voted for candidates who were likely to support those causes I care about—education, environment, employment, healthcare, diplomacy, peace—or, since the candidates I most admire seldom win their party's nomination, for candidates who might do the least harm. I supported moderate Republicans over ideological Democrats—William Milliken in Michigan, Robert Ray and Fred Schwengel in Iowa, for example—in the days when it was possible for Republicans to be moderates and when a bipartisan approach at least produced somewhat positive results, if not as fully positive as the general population needed them to be.

I've often said that I'm against what Republicans stand for and don't know what Democrats stand for. I know that what the party in power stands for may change when it's out of power, and vice-versa. At this year's inauguration, I thought all the generalized positions the speakers espoused were encouraging, all the promises positive. Much of it was moving and reassuring. But then I remember, before he was elected, all the accurate negativity his own party rivals expressed toward the character and motives of Donald Trump, how loyally and aggressively they supported his character, motives, and behavior once he wielded power, and now how sternly they decry the deeds they themselves fostered and abetted. Truth is the proper thing to uphold before abundant falsehoods lead to destruction, not something to pretend to promote later on.

It was inspiring to listen to the promises Biden's administration is making. I watched the inauguration all the way through. I hope it will be one I want to remember.