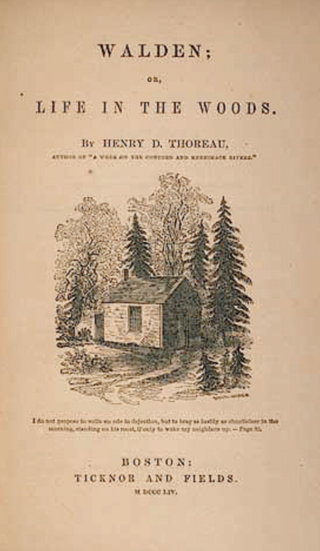 I'm curious about the effects writing can have on readers, certain that what we react to in literature arises from our own personalities, the experiences we've had, our memories of people we've known and events we've lived through. Talking to people about books you and they have read or films or plays you and they have seen you often sense that they read something other than what you read or witnessed a different performance even though they sat right next to you when you witnessed it. I remember, years ago, seeing An Unmarried Woman with faculty friends and hearing reactions that varied widely among the happily married couple, the divorcees in a second marriage, the troubled married couple, and the never-married bachelor.

Over the years I've gravitated toward writers who eventually revealed their admiration for the same earlier writers. One such writer is Scott Russell Sanders, who examines his relationship with Henry David Thoreau in "The Infinite Extent of Our Relations," an essay collected in The Way of Imagination. It's a significant study of the effect an individual book may have on a younger writer's development of over the course of his career.

Sanders tells us that he first read Walden at seventeen, "at the urging of a high school teacher who sensed that my adolescent mind, brimming with questions, would benefit from grappling with a truly radical thinker." He admits, "Much of the book baffled me." Because Sanders' country upbringing was among "thrifty, resourceful people," he appreciated "Thoreau's effort to provide some of the necessities of life with his own hands"—the physical labor constructing his cabin, chopping firewood, fetching pond water, and hoeing beans—but he didn't understand Thoreau's taking "pains to distinguish between the necessities of life and the luxuries, between enough and too much." He was excited by "Thoreau's desire to lead a meaningful life" and thrilled by his effort to explain what he lived for. His high school teacher was certainly right about Sanders' "adolescent mind, brimming with questions." He too imagined life having "a purpose beyond mere survival and the passing on of genes, beyond piling up possessions, beyond auditioning for paradise"—(what a great phrase)—but he didn't know what its purpose might be.

He quotes Thoreau's best-known passage: "I went to the woods because I wished to live deliberately, to front only the essential facts of life, and see if I could not learn what it had to teach, and not, when I came to die, discover that I had not lived. I did not wish to live what was not life, living is so dear; nor did I wish to practice resignation, unless it was quite necessary." That first reading of Walden encouraged Sanders to emulate "Thoreau's determination to observe and enjoy the marvels of Earth, to be fully awake and alive, right here, right now."

In the interval since that first reading, "fifty years and many rereadings later," Sanders acknowledges that Walden has become both "less bewildering, since I have made my share of difficult choices and suffered my share of losses, and also more challenging, since I have come to recognize more clearly my own limitations as well as those of the book." He recognizes that both he and Thoreau moved beyond Walden in their lives and their writing but acknowledges that the first reading was a formative experience for him and that "the example of Thoreau's life and the challenge of his thought remain potent influences for me, as they have been potent influences for generations of readers." Considering the age in which we live, the kinds of lifestyles that multitudes of us have acquiesced to almost automatically, he asserts that "we need more than ever to ask the questions posed in Walden": What is life for? What are the necessities of a good life? What is our place in nature? How should we spend our days? These are vital questions.

The broader assertion Sanders makes in the essay is this: "Great books read us as surely as we read them, revealing by the aspects of our character and personal history they illuminate, who we are." He confesses telling his students that, even if Walden doesn't speak to their condition, other books will—they will, in essence, read them, reveal who they are. Who we are is not always something we know well and he hopes that, whatever the book may be, it will be "giving voice to what you have felt but have not been able to say, asking your deeper questions, stirring you to more intense life." It's what reading Thoreau did for him and what it's done for a good many other readers, myself among them.

I am glad you wrote about this Bob. Not only because I fancy myself a nature writing reader and writer, but because I too am so I influenced and inspired by what I read. It translates directly into my writing. I am careful what I read and at what time, and I always keep a notebook handy in case a phrase or paragraph comes to me and must be written down. I also mark beautiful language, a thought or concept in paperback books for places I want to return. I use these as writing prompts. Thank you for writing this piece. I bought Sander' book but am waiting for some uninterrupted time to ponder his words. Take care and by the way, Riverteeth is publushing a short piece of mine in the Beautiful things section Feb. 8th.

I find how I read a book or essay or poem to change drastically with each new stage (age) of life. Words that once seemed impossible are suddenly full of light and wisdom.