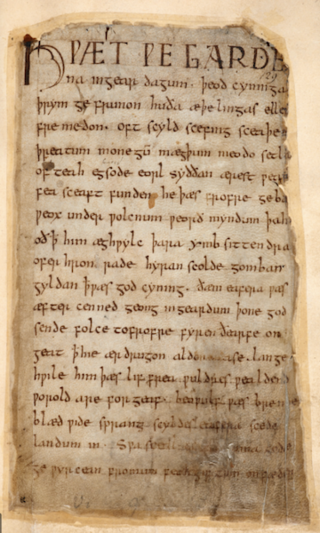 Jane Smiley's Last Hundred Years Trilogy follows one Iowa family for generations. I was reading Some Luck, the first novel, aloud at dinnertime when, in a chapter about Henry Langdon's life at the University of Iowa, I started this sentence: "The real benefit of the class, though, was that he met Professor McGalliard, and now, in the second semester, he was having a private tutorial in Old English, or Anglo-Saxon, or whatever you wanted to call it." The next sentence mentioned Beowulf. I stopped reading and exclaimed, "What?! What!?" Sue turned questioningly and I declared, "I studied Beowulf with Professor McGalliard at Iowa twenty years after Henry did." Except, of course, Henry was fictional and Professor McGalliard and the Beowulf class and I were real.

Jane Smiley, younger than I, earned her MA and MFA at Iowa when I was completing PhD and post-doctoral studies. We wandered the same hallways, studied with some of the same professors, but never met. The real-life professor in her novel, John McGalliard, was taught me to read Beowulf in Old English.

In Some Luck Henry meets McGalliard in a literature survey course running from Chaucer to Oscar Wilde, and later studies Old English texts with him, including The Anglo-Saxon Chronicles, "The Seafarer," and Beowulf. Smiley tells us, "After Christmas, he had brought that stolen copy of Beowulf back to Iowa City with him, and he kept it under his mattress." I studied those same titles at Iowa, several of them with McGalliard, and I suspect Jane Smiley did as well.

Professor McGalliard made a lasting impression on me. The mere mention of his name triggers lines from Beowulf: the very opening of the epic poem, "Hwaet! We Gardena in geardagum" ("Lo! We Speardanes in days of yore"); the statement "Beowulf mathelode bearn Ecgtheowes" ("Beowulf made a speech, the son of Edgethow"). I can still recite them with something close to the correct pronunciation, though I alter the orthography—the original text has different accents and letter combinations. McGalliard made his students read passages in Beowulf aloud, to get a sense not only of pronunciation but also of rhythm and meter. Those two alliterative lines (out of over 3000) have stayed with me for decades.

Late in our semester, McGalliard gathered his students in the Iowa Memorial Union to hear a discussion of ancient languages between our professor and a professor from Coe College, in nearby Cedar Rapids (whose wife was in our class). At one point the Coe professor read a long passage of Homer's Iliad in ancient Greek and then McGalliard read a long passage from Beowulf in Old English (or Anglo-Saxon or whatever you want to call it). We all recognized similarities in the nature of oral transmission and composition in ancient languages that we would have imagined had nothing in common. The occasion fostered an appreciation of the epic poem that our silent reading had not made apparent.

Around the time I took McGalliard's course, John Gardner published his novel Grendel, taking the perspective of the creature Beowulf kills in the epic. Gardner, it turned out, had been a student of McGalliard's. Ten years older than me, he was born in Batavia, New York, one county east of where I grew up, and earned both MA and PhD at the University of Iowa. Grendel, his third novel, was published in 1971. Someone in our class raised the topic of Gardner's book, and McGalliard spent a good part of that session inveighing against Gardner's interpretation. The discussion later made me read Grendel and, because it was about Batavia, I also read his novel The Sunlight Dialogues. I no longer recall what I thought of Gardner's fiction, but I confess that, since taking McGalliard's class, I've read at least four subsequent translations of Beowulf.

McGalliard was given passing reference in Smiley's Golden Age, the final volume of the trilogy. He retired about the time I finished my studies, a couple years before Jane Smiley ended hers. Gardner's Grendel was published almost two decades after he took McGalliard's class, Smiley's Some Luck roughly four decades later. Now I write this, almost five decades after Beowulf, Grendel, McGalliard and I met, just one passage in Smiley's novel merging my memories of graduate school with memories of her trilogy, John Gardner's novels, Batavia, western New York and eastern Iowa. All those things squirreled away somewhere in memory, somehow able to occasionally meet and mingle.