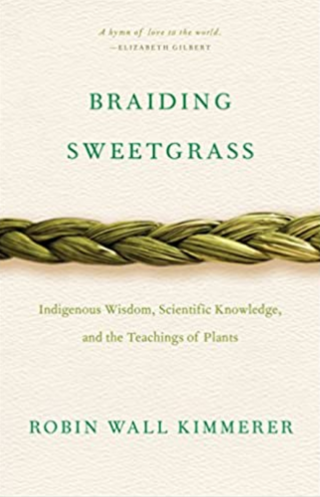 Robin Wall Kimmerer's books are well-regarded. Gathering Moss won the John Burroughs Nature Writing Award, Braiding Sweetgrass: Indigenous Wisdom, Scientific Knowledge, and the Teachings of Plants the Sigurd F. Olson Nature Writing Award. In 2020, after that second book made national bestseller lists, she shared online interviews with such prominent nature writers as Terry Tempest Williams, Robert Macfarlane, and Helen Macdonald (Macdonald's Vesper Flights was my most recent bedtime read). A back cover quote on Braiding Sweetgrass from Jane Goodall asserted, "Robin Wall Kimmerer shows how the factual, objective approach of science can be enriched by the ancient knowledge of the indigenous people." Other books I'd been reading had been shifting my sense of the way the world—maybe the universe—works. It seemed timely to examine Kimmerer.

The literary scholar Jane Tompkins has noted that Kimmerer's "native heritage, and the teachings she has received" from it, gave her a perspective that "transforms her experience, and her perception, of the natural world," one removed from what most non-Indigenous readers would expect. As both a member of the Citizen Potawatomi Nation and a Distinguished Professor of Environmental Biology, "two radically different thought worlds," Kimmerer "draws not only on the inherited wisdom of Native Americans, but also on the knowledge Western science has accumulated about plants." The blend that emerges is powerful and persuasive and allows the reader to simultaneously enter both perspectives.

Sweetgrass when braided has sacred uses among Indigenous peoples in prayer and purifying ceremonies. Sections of Kimmerer's book are organized around planting, tending, picking, braiding, and burning sweetgrass, and her preface suggests that she is braiding stories in the three strands of her subtitle, merging Native American, European, and botanical perspectives. Her approach doesn't simply harmonize cultural perspectives, though she does that well, but also raises the reader's consciousness of interaction with the natural world. From an indigenous perspective the interaction between people and plants and animals is never one-sided; it's a system of mutual benefits, of give and take, of giving back to the natural things that sustain us, helping them thrive even as they help us thrive.

In a chapter about basket making, Kimmerer is told by the man who helped her shear strips from a black ash, "Just think of the tree and all its hard work before you start." Gathered with others for craft classes, she quotes her teacher often. John Pigeon's approach to the craft of basket making insists on starting with the generation of the materials in a forest tree that "gave its life for this basket, so you know your responsibility." Kimmerer tells us, "Responsibility to the tree makes everyone pause before beginning." She claims to have that same sense when facing a blank sheet of paper: "For me, writing is an act of reciprocity with the world; it is what I can give back in return for everything that has been given to me. And now there's another layer of responsibility, writing on a thin sheet of tree and hoping the words are worth it. Such a thought could make a person set down her pen."

Anchoring her reflections on the natural world in an Indigenous perspective, Kimmerer thinks of our relationship with everything other than ourselves in terms of reciprocity. She emphasizes existence, being alive and being grateful for natural forces that contribute to her being alive—plants and animals and elements. Her gratitude extends toward everything she encounters, witnesses, experiences—berries, rain, maple sugar, waterlilies, corn, air itself—every aspect of existence. In contrast to seeing everything in European cultural terms—emphasizing technology, production, exploitation, profit—she establishes the idea of a simpler, more direct, more rewarding way to perceive everything.

Arguing against an "economy that grants personhood to corporations but denies it to the more-than-human beings," Kimmerer advocates the Indigenous teaching "of 'One Bowl and One Spoon,'" where "the gifts of the earth are all in one bowl, all to be shared by a single spoon" so that "resources fundamental to our well-being, like water and land and forests, are commonly held rather than commodified." She claims this idea echoes "the Indigenous worldview in which the earth exists, not as private property, but as a commons, to be tended with respect and reciprocity for the benefit of all." That worldview contrasts thoroughly with the commercial, competitive perspective of the society most of us are accustomed to.

Kimmerer suggests an alternative to the relationship our dominant culture has had with the planet. Suppressing that alternative has brought us to the cultural and ecological and economic and political place we face now in the 21st century. Braiding Sweetgrass puts those consequences in perspective, revealing options we've been ignoring that we might not have for our future.