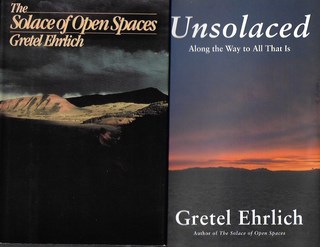 In her afterword to her new book Gretel Ehrlich tells us, "The writing of Unsolaced began in the spring of 2017 as a bookend to The Solace of Open Spaces, which was published in 1984. The fuel for writing Solace had come from the loss of a loved one and the discovery that my heart's home would always be Wyoming, a home on the range for a wanderer. Little did I realize that as I finished this new book, another similar kind of loss was at hand." As a bookend, Unsolaced: Along the Way to All That Is gives us a powerful perspective on the writing that came between the two books and also on the landscapes she traveled over nearly four decades. She doesn't say much about that potential similar loss but having alluded to her husband's brain cancer, anyone who has read her earlier book senses what she's feeling.

I read The Solace of Open Spaces, her first collection of essays, and each of her subsequent books about place as they were published. Her third nonfiction book—she's published fiction and poetry as well—was A Match to the Heart, where she recounts being struck by lightning while walking across her ranch on a clear day. The very idea that she could eventually write a book about it suggests something of her resiliency. Somehow, she not only survived but recovered, and has spent the decades since adventuring around the world. Later books take her to Greenland (This Cold Heaven), around the Arctic Circle (In the Empire of Ice and The Future of Ice), China and Tibet (Questions of Heaven), and Japan in the wake of a devastating tsunami (Facing the Wave). She's had an eventful life.

Unsolaced takes us into many of those locales with fresh imagery and narrative, not so much revisiting earlier writing as reflecting further on the places and experiences that occupied chapters of her personal and professional lives. As she moves forward in her chronology, she revives in me not only the memories of those earlier books but also my own awareness of her as a distinctive individual.

Decades ago, determined to write creative nonfiction in addition to the academic articles, conference papers, and criticism I'd been generating, I occasionally enrolled in workshops led by writers whose work I knew. The Environmental Writing Institute, a weeklong workshop led by Gretel Ehrlich, took place at the Teller Wildlife Refuge, a Montana ranch on the edge of the Bitterroot Mountains. We workshopped our writing in the morning, wandered in the mountains in the afternoon, and hung out in the evenings. About a dozen eager outdoor writers were in the group, gathering in a barn where swallows continually flew in and out. We all had read The Solace of Open Spaces; Islands, the Universe, Home; and A Match to the Heart.

On late morning breaks we strolled out into mountain sunshine, hoping Gretel would join us for conversation. Often, we formed a circle around her and talked about writing, hers and others'. We might have marveled at how well she had recovered from that lightning strike. The sky was mostly clear and bright. Suddenly a clap of thunder exploded close by; everyone instinctively stepped back away from Gretel, as if she would draw lightning to her again. As we sheepishly tried to recover our positions, Gretel laughed, undaunted by the thunder and amused by our sensing the potential for lightning in her presence. Happily, she wasn't offended.

Ehrlich's return in Unsolaced to locales from earlier books makes readers familiar with her writing aware of how climate change has accelerated the alteration of those landscapes, especially when she and fellow travelers risk crossing crumbling ice and shrinking shorelines in the Arctic and also when she encounters the changes in prairie grasslands from settlement and industry. She tells us in her afterword, "Finally, the sharp lessons of impermanence I learned while writing Solace still hold true: that loss constitutes an odd kind of fullness, and despair empties out into an unquenchable appetite for life." That awareness of loss and appreciation of life are vitally present throughout the book.

I don't remember now what work-in-progress I brought to that workshop, but recall that no one, especially Gretel, was much impressed with it. Still, at the end of each day, I journaled about my walks in the mountains, and eventually composed my earliest polyptychal essay, "Knowing Where You've Been." I reread it recently, after reading Unsolaced. It doesn't mention Gretel Ehrlich, but I'm sure her influence emanates from its pages—it may well hover over the best of the environmental writing I've done since that workshop.

I love her work. Bought Unsolaced, thanks to you, Bob! And what an experience in Montana. And I'm sure, knowing you and your work, your fellow workshoppers were impressed.