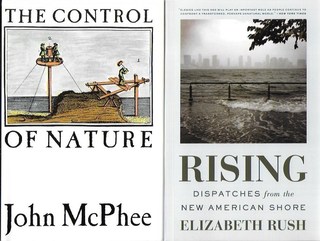 When you read certain kinds of books—essays and memoirs and ecological travel narratives, for example—a bonus might sometimes be extensions to the text that arise, perhaps personal memories of some sort, sometimes intimate, sometimes remote, but perhaps memories of other texts, setting off different reverberations.

That happened to me recently, reading New Yorker writer Elizabeth Kolbert's new book. I admired her earlier books, Field Notes for a Catastrophe: Man, Nature, and Climate Change (2006) and especially The Sixth Extinction: An Unnatural History (2014), a Pulitzer Prize winner that every intelligent person should read; it's a vital account of where we are and where we're heading. Some of the books I've read since were likely chosen in hopes of evoking what I felt in Kolbert's books.

At the moment I'm reading Under a White Sky: The Nature of The Future, once again impressed by the levels of information, intelligence, and expression she displays, but also startled to find myself stalling after the first section to pursue a path through other books that it called to mind. The section, titled "Down the River," focuses its first chapter on the Chicago end of the Mississippi and its second chapter—which triggered reverberations in my reading memory—on the Louisiana end.

For uncounted centuries the Mississippi River has found alternative routes to the Gulf of Mexico; for fewer centuries European-American immigrants to Louisiana have labored to thwart those alternatives. The Atchafalaya River to the west, running parallel to the Mississippi, could one day divert it entirely. When Kolbert focuses on the Atchafalaya in her second chapter, she remembers first reading about it in the opening section of The Control of Nature by John McPhee, which she calls "a classic piece" and "a morality tale of a darkly comic cast." Finishing her chapter, I went immediately to my bookshelves for McPhee's book, which I'd read some thirty years earlier.

"Atchafalaya," McPhee's long first section, explains the earliest geology and ecology of the lower Mississippi region and its history through French, British, and American occupation, particularly the tendency of the river to flood the lands around it, including the persistent city of New Orleans. Because of ever-rising levees surrounding it and the tendency of its land to subside, the city is now lower than the river. McPhee recounts flood after flood and futile efforts to counteract the possibilities of future floods. I remember being haunted by that book when I attended a conference in New Orleans and visited above-ground graves that they might one day sink or float away. Rereading McPhee revived many of those memories.

Earlier in that second chapter Kolbert flies over Plaquemines Parish, the southernmost tip of Louisiana. On a map, she writes, it "appears as a thick, muscular arm thrust into the Gulf of Mexico, with the river running, like a vein, down its center," but from the air, "What little land there is clings to the river in two skinny strips." The parish has the distinction, she claims, "of being among the fastest-disappearing places on earth." A map in the book distinguishes between locations underwater and locations above ground, a clear contrast with the online Google map. Kolbert visits Isle de Jean Charles, "fifty miles southwest of New Orleans and a few decades ahead of it," and explains why it is disappearing. Her account of it sends me back to my bookcase for another book, published around the time when an earlier version of Kolbert's chapter appeared in The New Yorker.

In Rising: Dispatches from the New American Shore, Elizabeth Rush walks a narrow, single-lane road on "the highest and most stubborn spine of land" out onto Isle de Jean Charles, now "two miles long and a quarter mile wide" but once ten times larger less only fifty years earlier. It's a vivid and unnerving stretch of narrative. Kolbert blurbed the book, asserting that, "Sea level rise is not some distant problem in some distant place" and crediting Rush with having written "a compelling piece of reporting, by turns bleak and beautiful." My review of the book quoted Rush's contention that "our particular brand of western knowledge has lulled us into thinking that we are separate from nature," and argued that her "travels along the new American shore confirm that we're not separate at all."

Conditions are worse for the Louisiana Coast in Kolbert's viewing than in McPhee's reporting thirty years earlier. Climate change, rising seas and land subsidence continue, as will futile efforts to control nature along the Mississippi River. Returning now to later chapters in Under a White Sky, I'll follow Kolbert to the Mojave Desert and Iceland and Australia. I'll learn a lot, I know, but I also wonder what further reverberations she'll set off in my reading memory.

Kolbert, Elizabeth. Under a White Sky: The Nature of the Future. NY: Crown, 2021.